TOP ACTIVITIES TO DO IN KAMPALA CITY

Kampala is Uganda’s capital city and the business center, the city is located in the central part of the country, a few kilometers from the country’s international airport Entebbe airport, approximately 37km. Kampala is made of 7 hills, these are; old Kampala hill, Rubaga hill, Makerere hill, Kibuli hill, Kololo hill, Mengo hill and Mulago hill. Kampala is dominated by the Baganda people who take up the central region. The city’s population grows big each and every day due rural urban migration, these mostly settle in the slums of Kampala, creating a big market for slum tourism. Kampala city gets busier each day due to a number of people who flock to the city to earn a living. It’s unfortunate that most of these people earn only daily meals with no extra income to save.

It’s surprising Kampala has a lot of night hangouts that are filled in the middle of the day, the peoples’ low-income status does not stop them from enjoying night life. Bars and casinos are all over the city for both high end customers and for low-income earners. However, the city has a lot of tourism attractions that range from natural, cultural and man-made attractions, most of which are culturally based with roots of the Buganda kingdom, some are located in the outskirts of Kampala. 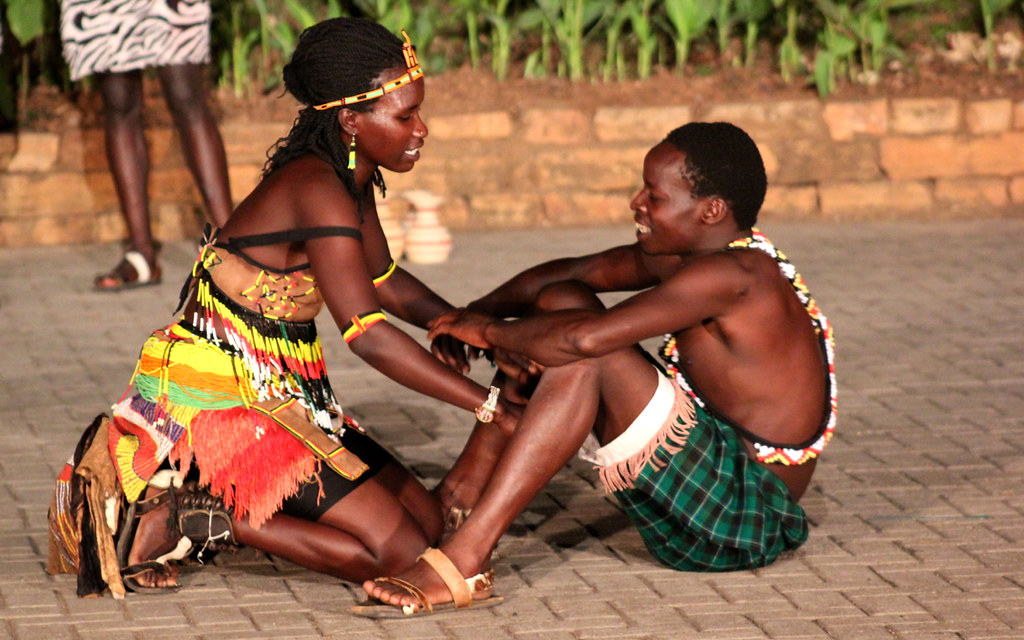 The is located in Kampala district just a few kilometers from Kampala city. Ndere cultural Centre is the best place to visit for a cultural tour in Uganda. There are various traditional dances from different tribes of Uganda performed at Ndere cultural Centre. There are over 40 cultural performances from different tribes in Uganda, Rwanda and Democratic Republic Congo. Ndere cultural centre has an arena where cultural performance mainly dances are conducted from, as you watch the dances, you can order for any food from any tribe you want. Some tourists choose to join the dances and get the feel of the African tradition.

This palace is located in the heart of Kampala city in Mengo. The palace is official residence for the reigning king the Kabaka of Buganda. In Buganda, was customary for a new king to choose a hill where he would build his palace, which would later be the capital of the kingdom, he would name it as he wishes. The palace was built in 1885 organized by Ssekabaka Mwanga Daniel the second 2 who became king after his father. Up to date the royal family stays in this palace. The palace has a lot of tourism sites like the Amin’s torture dungeon where hundreds of people were tortured to death, the Bulange trail which has sculptures of the animals representing the clans of Buganda.

Uganda’s museum was built in 1908. This where Uganda’s history is preserved. The museum is situated five kilometers from Kampala city centre on plot 5 Kira Road, when coming from Kampala, you pass through Wandegeya trading centre and by Mulago hospital, just Kamwokya town When you enter the museum, you immediately feel you are in Uganda’s past time. There is a lot of Uganda’s art facts, musical instruments among others that will blow your mind. You will see the music gallery which has traditional music instruments from different tribes found in Uganda, you will the archeological sector which has stone tools that were used over a million years ago, the spears, arrows. Apart from that’s, you be taken to the cultural village which has grass thatched hearts representing the traditional lifestyle of Uganda. 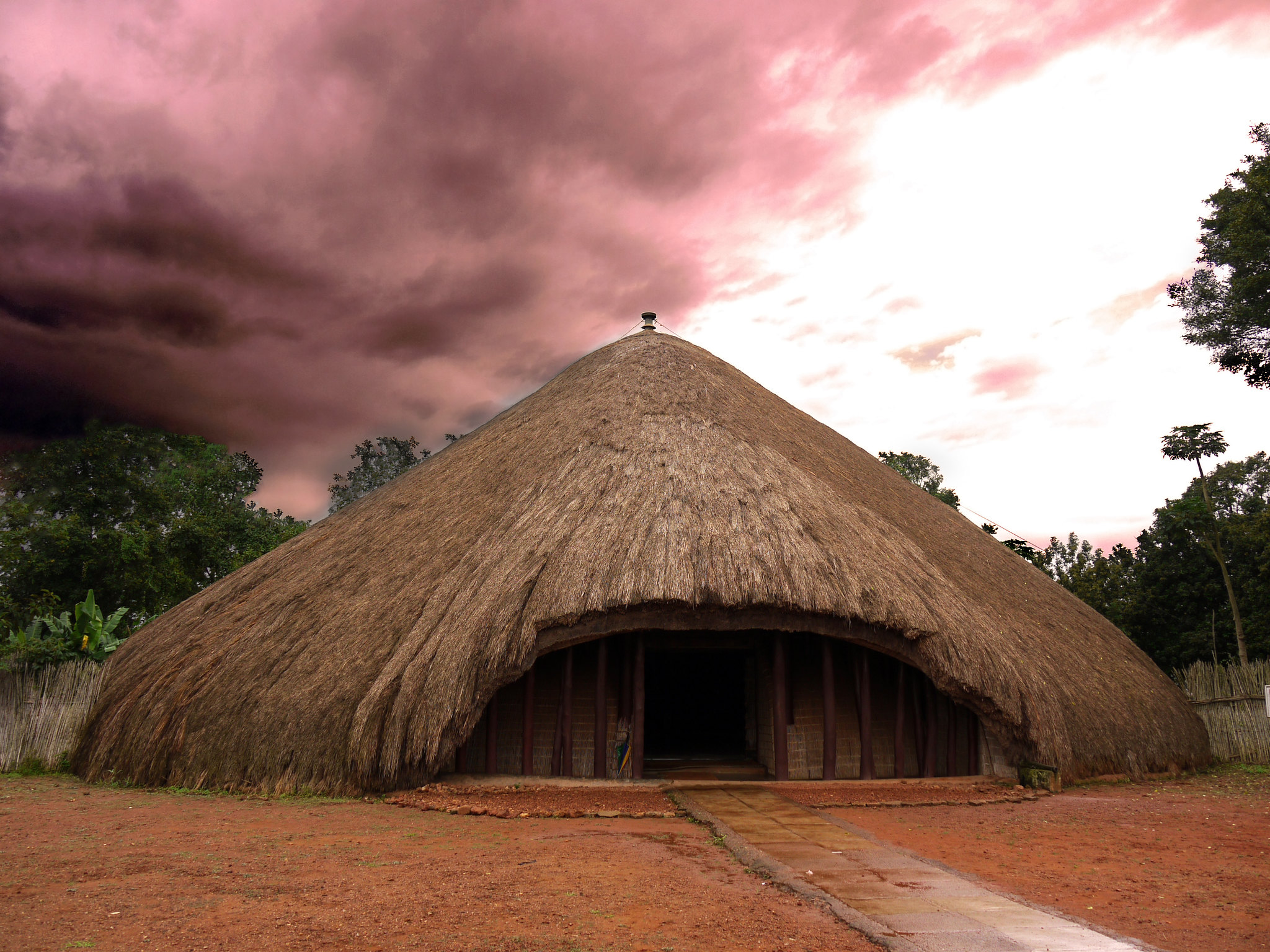 The Kasubi tombs are only a few kilometers from city centre and can be explored in one day while on a city tour, those doing research can exceed the one day. 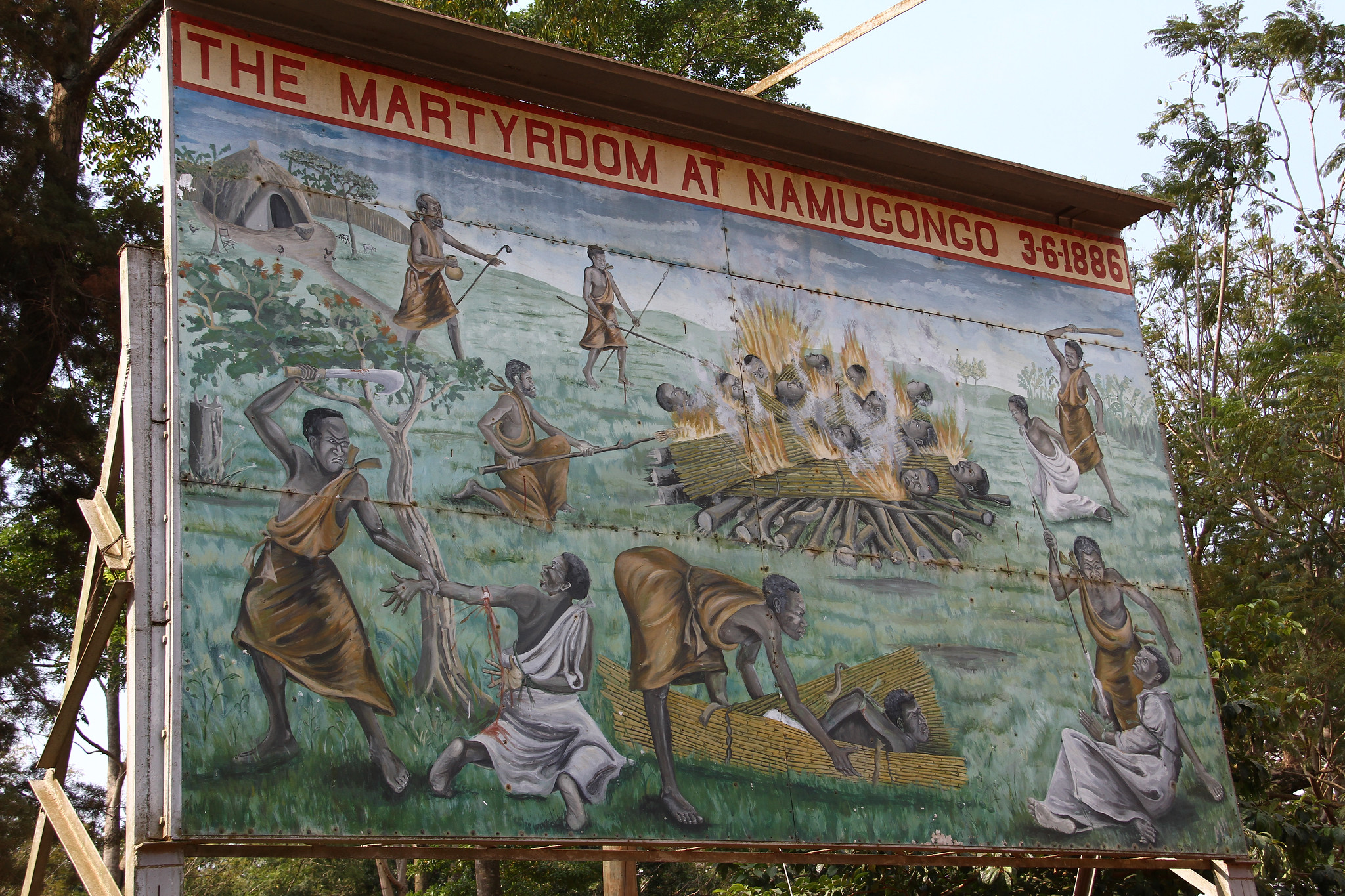 Namugongo martyrs’ shrine is one of the most visited religious sites in Africa consecrated in 1975. It’s a Roman Catholic minor basilica dedicated to Ugandans who were killed by Kabaka Mwanga of Buganda, because they had adopted a foreign religion which looked as a threat to his throne.

They were over 32 men who refused to denounce Christianity, some of them had adopted the Anglican faith and others the catholic faith. Some were burned alive and others were killed with pangas and spears. The shrine was built in Namugongo because, most of the men were burned from that area while others were killed from different places like Munyonyo where they killed saint Andrew from. When you visit Namugongo shrine you see sculptures showing how the exact moment was when martyrs where being burned to death.

Every year on 3rd June millions of people come to Pay a pilgrimage to Namugongo in the honor of the men who died for their faith. You can visit Namugongo shrine any time of the year.

Gadhafi mosque was constructed in 1972 by president Idi Amin Dada who was a great follower of the Islamic faith. It is the main Muslim Mosque in Uganda and the biggest. The mosque was renovated and re defined in 2007 by the then president of Libya Muammar Gadhafi hence the mosque’s name Gadhafi. The sheik at the mosque will take you around the mosque and inside, as he tells you stories and history of the mosque.

This is the only temple of the Bahai faith in the whole of Africa.  The Bahai faith originate from present day Iran. This beautiful temple is located on kikaya hill, visiting the temple will avail you more about what the religion teaches and preaches to its follower. Taking photos inside the temple is highly prohibited because it is against the religion’s faith and beliefs.

The cathedral belongs to the Roman catholic church which is the most followed faith in Uganda with over 30% of the country’s population. The cathedral is located on one of Kampala’s hills, lubaga hill. History has it that, this hill had the palace for Kabaka Mutesa, the palace was shifted to Mengo after a fire outbreak. The hill was later donated to the catholic missionaries by Kabaka Mwanga the second in 1889. It is in this cathedral that the remains of Joseph Kiwanuka the first African man to become a bishop are buried.

The Jewish faith was introduced in Uganda in 1998. Their church is situated in Kibuli area. The religion has spread more in mbale town in Eastern Uganda. The synagogue is a good place to visit for those who want to know more about this faith.

Owino is one of the largest permanent markets in Kampala and Uganda as a whole. The market is also referred to as St. Balikuddembe market in the memory of a Uganda martyr Joseph Balikuddembe who was martyred in that area, the market  has a church in the names of St. Balikuddembe catholic church. Owino market has a wide range of commodities from households’ merchandise, fruits and vegetables, foods like serials, nuts, all sorts of flour, cassava, seeds, Irish and sweet potatoes, matooke, scholastic materials, imported second hand clothes and shoes. It’s hard to look for something in Owino market and fail to get it. The market receives over 20,000 people per day, some of which come to buy commodities for consumption, others to get products for their businesses. The market has products at the cheapest price compared to other places in the city. 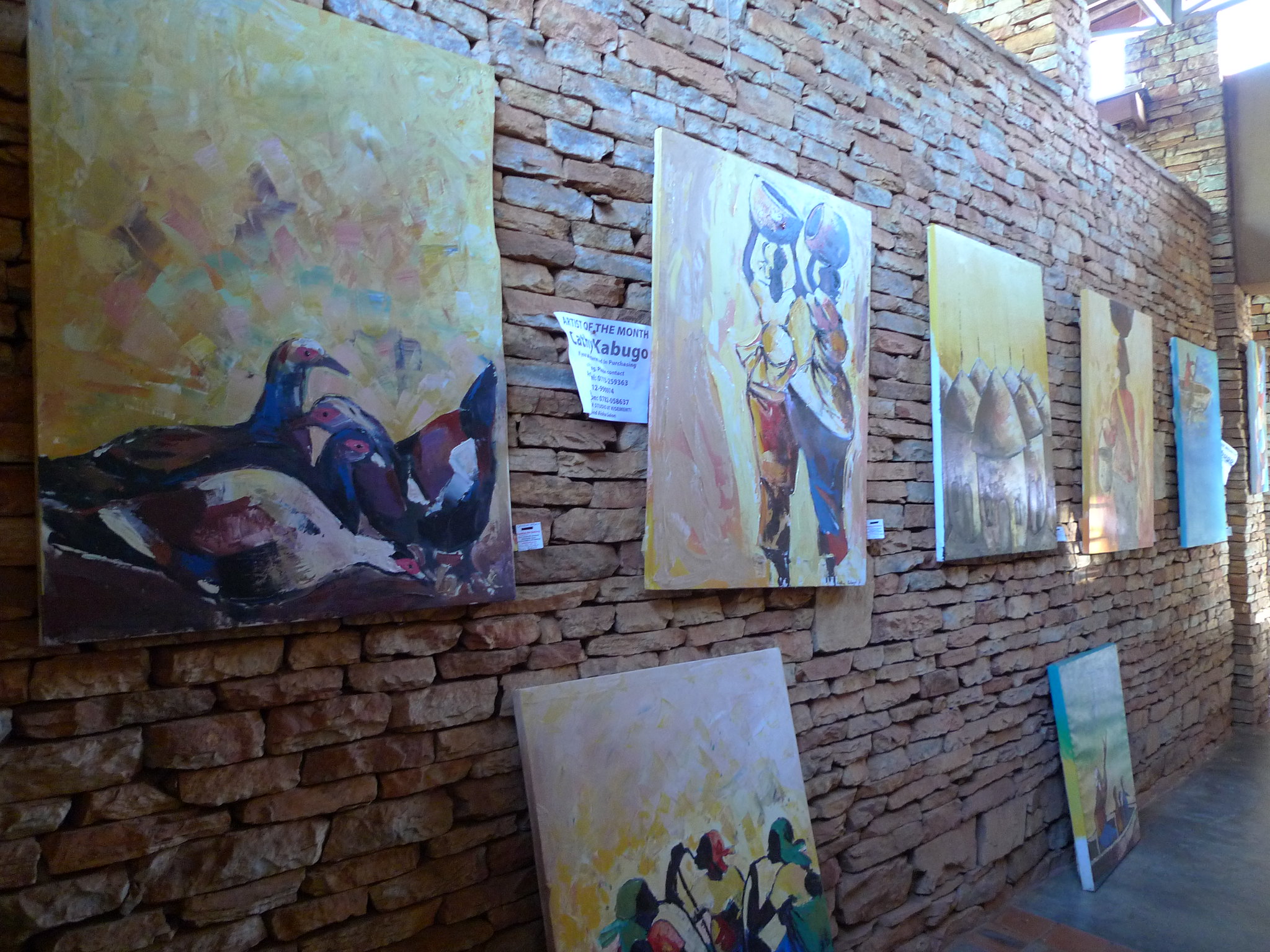 Uganda as a country is gifted with talented artists and creative people. Kampala has a wide of craft markets spread throughout in the city. These include; Nommo gallery, AFRI art gallery, Asante gallery among others. They make African print cloth materials, mosaics, baskets, unique bags, home décor, sculptures among others. Get yourself a souvenir from these art galleries as you go back to your country.

Kampala city is a very alive a cheerful city, people are always moving up and down, some going in concerts, bars, some working to earn a living. Kampala dwellers party like it’s their last day on earth. Be ready to get the best out of your night life in Uganda, you may opt to go to high end hangouts or to low-income earner’s hangouts. Bars are always filled with all sorts of beverages, beautiful ladies and men, entertainment from artist and a lot you may think of about a night life. Clubs you may go to include Guvernor, fame lounge, club Ambiance, wave, level’s chicken, life of the part at garden city, and many more that are coming up every day.

Katereke prison ditch was dug and constructed on the orders of Kabaka Kalema in 1888 who was afraid that his siblings may take his throne and had become his political rivals. He captured and imprisoned all his brothers and sisters until they were starved to death. Apart from his siblings, other peasants and Royals were starved to death also. The prison is located in Nsangi wakiso district a 1-hour drive from Kampala city

Wamala tombs are located in Wamunyenye in wakiso district, it’s a 30 minutes’ drive from the city centre along Hoima high way. Wamala tombs is where Ssekabaka [fallen king] Ssuna was buried. Ssuna was one of the Buganda kings with the highest number of wives and children. He had over 100 wives and over 200 children. It is said that Ssuna was the last king to have his jaw bone removed after his death. Wamala tombs are treasured by the Baganda people. Inside the tombs there is a hut where the skull of Kabaka Ssuna is kept, there is a fire place that doesn’t stop burning. When you enter inside, you are welcomed by darkness, spears of different sizes, shields that were used in wars. The tomb has a wide range of Buganda’s arts and crafts like baskets, gourds, drums, mats and animal skin.

This site is located in Buddo wakiso district. It is said that Buganda kingdom started from this place after Ssekabaka kintu declared himself as the new king, this happened after him, killing his brother Bemba Musota. Naggalabi coronation prevails you with an opportunity to see the tree which is said to be the place where the earlier courts of Buganda kingdom used to sit, judge and govern from. After coronation of the Kabaka, sexual intercourse is prohibited for nine days, in the period of nine days the Kabaka stays in his house as he plans on how to govern his kingdom and chooses his cabinet.