Akagera National Park is located in the eastern part of Rwanda at lower altitudes in boarder with Tanzania, The park is dominated scenically by a labyrinth of swamps, Savannah, montane ,beautiful wild flowers and lakes that follow the meandering course of the Akagera River, one of the main sources of the River Nile.

Akagera National  park covers an area of 1122 square kilometers and it was established in 1934,it was created by the Belgians during the colonial times ,the park  was named after the Akagera  River which flows through the park towards the eastern boundary. In 1970 Rhinos were introduced from Tanzania, more than 50 black rhinos lived in the forest , In 1986 Masai giraffes were introduced in Akagera national park from Kenya ,the black rhinos diminished due to wide spread poaching and it was more worse after the 1990 Rwanda Genocide when refugees  were returning to the country and invaded the park for timber, animals for meet and grass lands for their livestock ,animals were hunted ,displaced almost every thing disappeared.

In 2010 Rwanda tourism Board in partnership with other conservationists put efforts to restore the park,laws were enforcement and significantly reduced poaching
A counter-poaching canine unit was trained and deployed in 2015 to help secure the park
A 120 km solar powered predator-proof fence was constructed and significantly reduced human-wildlife conflict situations

In 2017, 18 Eastern black rhinoceros were reintroduced to Akagera National park ,  after a 10-year absence
Lions were reintroduced in 2015 after they were hunted out in the 1990s, and the population doubled in the first year with the birth of eleven cubs and two additional males were translocated from South Africa to Akagera in 2017 to increase the population’s genetic diversity.

Akagera National park now  has exceptional levels of biodiversity and forms a large protected wetland. This  is the only Savannah national park in Rwanda for  sightseeing  most of the large mammals while on safari

The park is natural covered with  bush Savannah tangled with acacia and branchystagia woodlands with stands of Euphorbia candelabrum, patches of rolling grasslands, riverine, lakes and swamps. To the west of the park are hills reaching to elevations of 1600m-1800m above sea level

Akagera national park has got a variety of wildlife species ranging from elephants, buffalos, giraffes, zebras, leopards, hyenas, lions and also a home to many antelopes  such as the diminutive oribi and the world’s largest antelope, water bucks, klipswing, impalas, the cape eland to mention but a few, Pods of hippopotami splutter throughout the day while outsized crocodiles soak up the sun with their vast jaws agape.

Akagerara National park is ahome to about 500 bird species,Along the lake shores are some of the continent’s densest concentrations of water birds, while the marshes are home to the endangered bird species like the exquisite papyrus gonolek, the jacanas, Ibis, sand pipers,herons and the bizarre shoe-bill, probably the most eagerly sought of all African birds.

The park also has primates that include Olive baboons,vervet monkeys.blue monkeys and bush babies these can be sighted during the night game drive.

National park is an spectacular activity where the birders get a great chance to see a variety of bird species, like the rarely endemic birds like the shoebill stork, papyrus gonorek plus the kingfishers, egilets and weavers to mention but a few. These birds can be seen most especially in morning hours when they haven’t set off for feeding. During your nature walk, game drive you get an opportunity to see them.
Boat cruise on Lake Ihema
A boat cruise on lake Ihena is a joyful experience, cruising on the lake gives a chance to view different wildlife species like the , schools of hippos, animals that come to drink water, and water bird species lake Ihema
Night game drives. 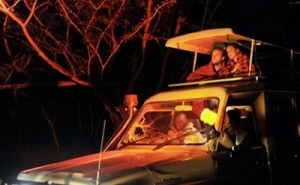 During a night game drive in Akagera national park, you will get a chance to see some wildlife species like the nocturnal animals that normally feed at night, lions catching their prey and the leopards as well because they also go hunting during night time. This makes the night game drive joyful and adventurous.
Sport fishing on Lake Shakani.
Akagera national park gives an opportunity to tourists who like sport fishing, interested clients get chance to also see other wildlife species and birds and also seeing the hippos and water birds

Akagera National park allows the tourists to have nature walks and cultural tours in the community around the park, they get to see and learn how people live their life, they getting to associate with the community.

How to access Akagera National park,
Akagera national park is located in the north east part of Rwanda, 110 kilometres from Rwanda capital city Kigali and it takes 2hours and 30 minutes’ drive from Kigali to Akagera.