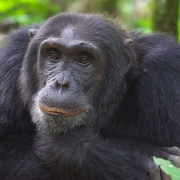 Chimpanzees are our closest living relatives, sharing more than 98 percent of our genetic blueprint. Humans and chimps are also thought to share a common ancestor who lived some four to eight million years ago. The characteristic chimpanzee shape includes arms that extend beyond the knees, opposable thumbs, and a prominent mouth. The skin on the face, ears, palms, and soles of the feet is bare, and the rest of the body is covered with brown to black hair.

Chimpanzees usually move on the ground, although during the day they mostly stay in trees, where they also sleep in makeshift nests made with vegetation. This species walks “on all four”, but individuals can also walk on their legs for more than a kilometer. Young individuals sometimes swing from branch to branch.

Chimpanzees have already disappeared from 4 African countries, and are nearing extinction in many others. Deforestation and commercial hunting for bushmeat are taking a terrible toll on most populations. 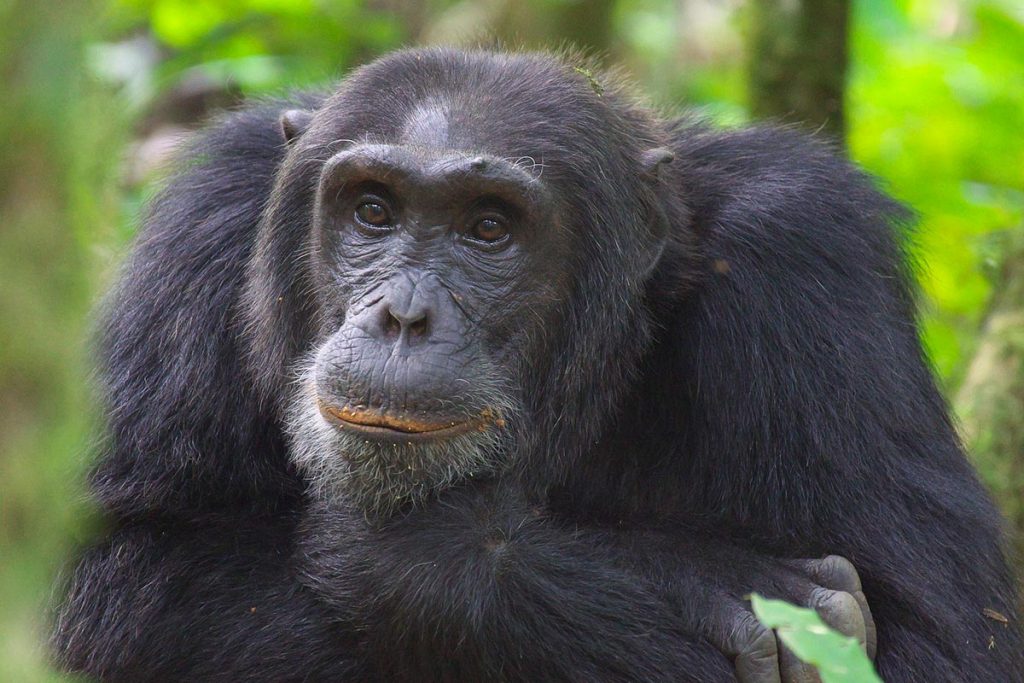 Communication, behavior, diet, and tool use varies between chimpanzee communities.

You may also like – 4 Days Gorilla Tracking Bwindi Chimps Kibale

Chimpanzees are complex, intelligent, fascinating beings who have captured the imagination of humans for centuries. They are our cousins, like us in so many way, and are sadly being threatened on all sides by human encroachment in the wild and exploitation in captivity. It will take a concerted effort to ensure their continued survival in the forests of Africa into the future and Uganda Chimpanzee Tracking one of the ways we contribute to preserving these primates

Chimpanzees live in social communities of several dozen animals, and can habituate themselves to African rainforests, woodlands, and grasslands. Although they normally walk on all fours (knuckle-walking), chimpanzees can stand and walk upright. By swinging from branch to branch they can also move quite efficiently in the trees, where they do most of their eating. Chimpanzees usually sleep in the trees as well, employing nests of leaves.

They say hello to each other by panting, indicate displeasure by grunting and flicking their wrists at the one who has offended them, laugh while playing and tickling, stand their hair up on end when they are nervous, and scream when they are angry and upset. From fear and anger to joy or excitement – chimpanzees make it pretty clear what they are feeling.

Diet and Feeding Of Chimpanzee

Chimpanzees spend a large part of their day looking for food and eating, but they do not wander aimlessly through the forest hoping to bump into food. They know where they are going and remember from year to year where food is located and when a particular fruit is ripe.

Chimpanzees are omnivores and eat food items such as fruits, leaves and other plant parts, honey, insects (especially termites), and occasionally eggs and meat.

Chimpanzees eat with their hands, which they also use to throw objects at enemies and to create tools. Notably, they will poke a stick into a termite mound to feed on the insects, and crack nuts open.

The animals forage during the day for 6-8 hours, with peaks of activity in the early morning and late afternoon. Depending on the fruiting times of the plants they feed on, activities may shift seasonally.

Chimpanzees sometimes stalk, kill and eat other primates or young antelopes, and may hunt co-operatively.

Chimpanzees live in multi-male, multi-female communities. The females may mate with multiple males, and the males thus generally treat all offspring as if they were their own, since there is no way to know for sure.

Females have a bright pink bottom that signals to males when they are fertile. A female chimp will usually have her first child at around the age of 14 years old.

The gestation period is about 8.5 months, very similar to humans. The infants are dependent upon their mother for at least 5 years, and can usually live independently by age 6, but still spend considerable time with their mothers even into adulthood.

Chimps are considered adults by age 15. A female chimp will not be fertile again until her child is fully weaned, so at most, a female chimp will give birth every five years. She may have approximately 4-6 children in her lifetime.

What are the Main Threats?

The main threats to the chimpanzees are habitat loss and hunting for bush meat. The relative severity of these threats differs from region to region, but the two are linked.

Degradation of forests through logging, mining, farming, and other forms of land development is contributing to the decline of primate species throughout tropical Africa. Remaining habitat patches are often small and unconnected, leaving chimpanzee populations isolated.

Deforestation is most advanced in West Africa, where only remnant tracts of primary rainforest remain. The small populations of western, Nigerian, and eastern chimpanzees are primarily located in remnant forest reserves and national parks.

In many such “protected areas”, poaching for meat and live infants is common, as is unauthorized logging, mining and farming. Logging activities improve access to formerly remote forest areas, leading to increased hunting pressure.

Where to find Chimpanzees in East Africa

They can be found in Uganda Safari, D.R. Congo and Rwanda Safari. With Engagi Safaris you can have the best Chimp Trekking in East Africa. We have packages tailored to offer you beyond what you expect.

Flying gorilla trips to Bwindi from Entebbe to Kihihi/Kisoro