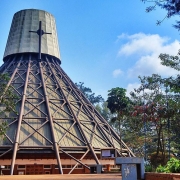 The Uganda Martyrs are a group of 23 Anglican and 22 Catholic converts to Christianity who were executed between 31 January 1885 and 27 January 1887. This was done following the orders of Kabaka Mwanga who was the reigning king of the great kingdom of Buganda which is currently part of Uganda. In 1967 the construction of the Uganda Martyrs shrine at Namugongo started and was completed in 1975. Its architecture is so unique and representing the old traditional way designed it to look like an African hut, wrapped around 22 copper pillars signifying the 22 Martyrs and a white cap on top. The circular interior was to contain up to 1,000 seats. Some of the martyr’s remains are kept in there. The shrine is located at the same spot where the martyrs were burnt and where the former church was. There is also a lake whose water is believed to heal disease. It is situated 15km from Kampala City Centre in Kira Municipality Wakiso District. Since the 1980s it has become the venue of massive pilgrimages. On February 07, 1993, Pope John Paul II made a pilgrimage and officially declared it a minor Basilica, which Rome bestows upon certain churches following a major spiritual event. 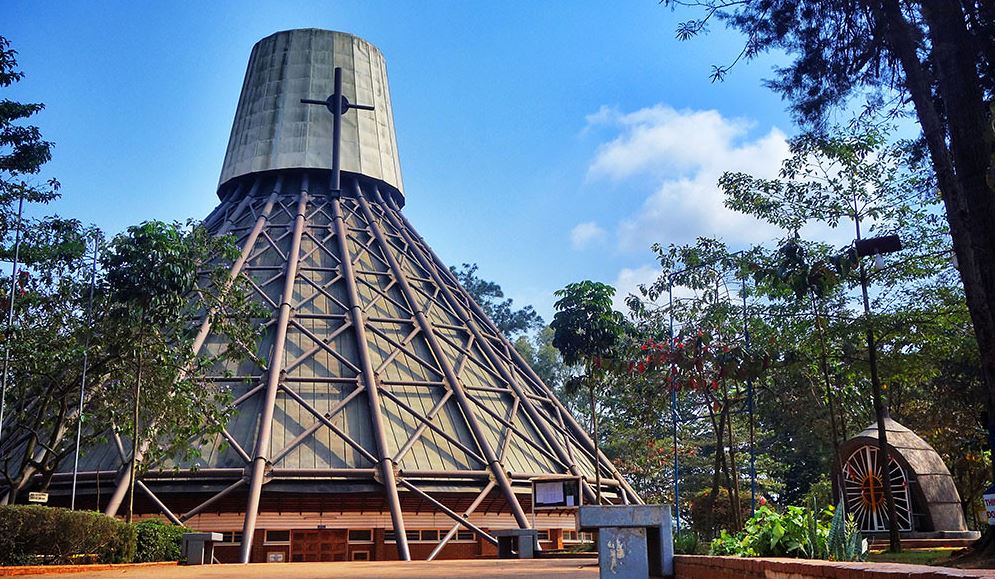 People from different parts of the world converge at Namugongo and Munyonyo Shrines to commemorate the death of the martyrs every 3rd June, It also marked a public holiday on the calendar.

The place has become small since the numbers of people keep increasing each year. Plans for large-scale expansion were announced in 2014 and celebration of 50 years since the Uganda Martyrs were canonized. Re-development includes the construction of a new church shrine, museum, offices, and martyrdom spots of the saints. The official groundbreaking was on 3 May 2015 by the Papal Nuncio to Uganda, Archbishop Michael A. Blume, and Cardinal Emmanuel Wamala. The Munyonyo Martyrs Shrine is a thanksgiving monument for their canonization.

Every June 03, the world remembers the Uganda Martyrs who were executed between 31 January 1885 and 27 January 1887 by Kabaka Mwanga II for their faith in Jesus Christ. They included 23 Anglicans and 22 Roman Catholics.

Both the Catholic and Anglican churches on Monday announced that only 60 People had been invited to attend the Uganda Martyrs Day Celebration at Namugongo.

The Bishop of Namirembe Diocese, Wilberforce Kityo Luwalira, said only 40 people have been invited to attend the celebrations on the side of the Anglican church for prayers to be led by Archbishop Stephen Kaziimba whereas the Catholic Church had invited 20 people for prayers to be Kampala Archbishop, Cyprian Kizito Lwanga. Every year, thousands of pilgrims travel from within and outside Uganda to celebrate the 23 Anglican and 22 Catholic converts to Christianity who were killed on orders of then Buganda King, Mwanga II between 1885 and 1887.

Christians have marked this year’s Uganda Martyrs Day from their homes. This follows the presidential ban on public gathering to prevent the spread of the COVID-19 pandemic that has infected over 6,000,000 people and caused over 382,000 deaths

In his Martyr’s Day message to the public on Tuesday, President Yoweri Museveni asked believers to pray from home as they have been doing over the last two months.

“The religion practice of gathering in Namugongo for special prayers will not take place this year because of the deadly coronavirus disease, which has spread to the entire globe,” he said adding that this virus has the potential of spreading like a bush fire once it finds large groups of people near each other.

“We must continue to deny it this opportunity by praying from our homes,” Museveni said.

The President noted that one of the attributes of God is that he is omnipresent and referred to the book of Psalms 139: 7-8 which reads; Where can I go from your Spirit? Where can I flee from your presence? If I go up to the heavens, you are there; if I make my bed in the depths, you are there.

“We continue to lift our nation in prayer and ask for God’s protection of all Ugandans against the coronavirus disease,” he said.

About 100 pilgrims have been accredited to attend prayers at both the Roman Catholic and Anglican shrines at Namugongo in Wakiso district. However, the prayers are being broadcasted live on TV and radio.

Security has been deployed at all entries to prevent the people who are have not been invited from accessing the premises.

Unlike the usual Martyrs Day celebrations characterized by festivities, heavy traffic jams, and big crowds comprising of Christians, vendors, and well-wishers, this year Namugongo is calm.

Apart from the accredited worshippers and security officers patrolling the area, there were few pilgrims praying near the fences of the Martyrs shrines.

The move to limit the number of piglims at Namungongo for the 56th Uganda Martyrs Day Celebration is meant to avoid the spread of coronavirus.

THE HISTORY OF THE UGANDA MARTYRS

Kabaka Mwanga Succeeded his father Kabaka Muteesa who had invited the Missionaries to come to Uganda in 1875 which paved way for the coming  Alexander Mackay of the Anglican Church Missionary Society to Buganda in 1877. A group of French Catholic White Fathers, led by Père Simon Lourdel (Fr. Mapera) appeared two years later. Arab traders from Zanzibar had introduced Islam into the kingdom earlier. During this period it was also the time for scramble and partition of Africa and 3 religions was struggling to be influential in Buganda which brought divisionism. Muteesa himself had converted to Islam however, many prominent chiefs had become Christians.

A year after Mwanga took over power, he first ordered the execution of Yusufu Rugarama, Makko Kakumba, and Nuwa/Noah Serwanga, who had converted to Christianity. On 29 October 1885, he had the incoming Anglican bishop James Hannington assassinated on the eastern border of his kingdom after being ill-advised by his prime minister. In 1886, Mwanga ordered the executions of a number of his pages both Christian and Muslim converts including Joseph Muaksa. Many killings followed between 25 May and 3 June 1886 all the young men who disobeyed him; 22 of the men, who had converted to Catholicism, were burned alive at Namugongo in 1886. This was also done partly to succumb to the demands of his chiefs.  Some of them were killed on their way to Namugongo and the places where they died from are also recognized as martyrs’ shrines. The 22 martyrs included; Achilleus Kiwanuka Adolphus Ludigo-Mukasa, Ambrosius Kibuuka, Anatoli Kiriggwajjo, Andrew Kaggwa, Antanansio Bazzekuketta, Bruno Sserunkuuma, Charles Lwanga, Denis Ssebuggwawo Wasswa, Gonzaga Gonza, Gyavira Musoke, James Buuzaabalyaawo, John Maria Muzeeyi, Joseph Mukasa, Kizito Omutto, Lukka Baanabakintu, Matiya Mulumba, Mbaga Tuzinde, Mugagga Lubowa, Mukasa Kiriwawanvu, Nowa Mawaggali, Ponsiano Ngondwe. 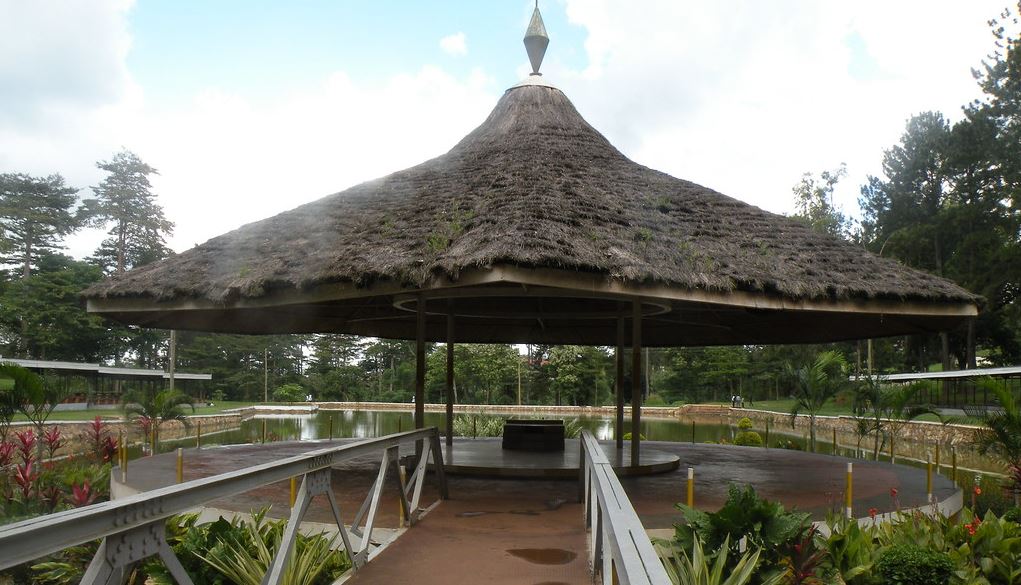 It said that one of the reasons he ordered the killing of the Uganda Martyrs because of the young men’s refusal to engage in homosexual; the impossibility of satisfying his shameful passions. Homosexuality was legal in Buganda, the young men who served in the kingdom provided sexual services for visitors and elites. He, therefore, resented Christianity hence killings however those who denounced it were spared. It is also said that the Christians rebelled against the Kabaka, unconscious tools of colonialism. Mwanga felt despised the Christians who had acquired education from the missionaries claimed superior knowledge of religion. He was also so scared and thought he would lose his power hence wanted to protect his throne

However, some years after the death of the Uganda Martyrs paved the way for Britain to take over Buganda and Uganda at large. The Roman Catholic Church also used this opportunity to spread Christianity focusing on the victims.

Pope Benedict XV blessed Charles Lwanga and his fellow martyrs on 6 June 1920, and Pope Paul VI canonized them on 18 October 1964 and also the Anglican martyrs who confronted death in the name of Christ.

Till today the Uganda Martyrs are highly honored for their bravery. Several churches and schools have been built in their honor and for remembrance. In 1890, a church was built in Senegal containing their remains. In 1993, the Uganda Episcopal Conference established a university named after the Uganda Martyrs, which received its Civil charter in 2005.

Besides the 22 martyrs, there were also two Ugandan martyrs of a later period, who died at Paimol in 1918 and were sanctified in 2002 but not yet been canonized. Daudi Okelo and Jildo Irwa were two young catechists from Uganda. They belonged to the Acholi tribe, a subdivision of the large Luo group. They lived and were martyred in the years immediately following the founding of the mission of Kitgum by the Comboni Missionaries in 1915.

Despite Uganda being known mostly for gorilla trekking safaris, it also has religious tours. The common one being the Uganda Martyrs trail. It is Uganda’s exclusive faith-based tourism product that takes you through different places where the first Christian missionaries passed and preached from. It also takes you to places where some of the Uganda Martyrs were killed before their bodies being taken to be burnt at Namugongo. These Places include Mapeera Site in Ssese Island on Lake Victoria, Kigungu Church in Entebbe, Munyonyo Martyrs Shrine in Kampala, St. Balikudembbe shrine in Kampala and the Uganda Martyrs Shrine in Namugongo.

Engagi safaris take you on this faith-based journey to all the above-mentioned places so as you get a clear picture and knowledge about the Uganda Martyrs.

What To Pack For Gorilla Trekking Safari
Scroll to top