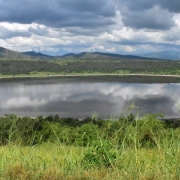 Queen Elizabeth National Park is Uganda’s most visited park located in southwestern Uganda. It is endowed with beautiful flora and fauna.

The park lies in a volcanic field which is roughly 210 km2 in size with craters which differ in size the largest has up to 3 km in diameter and 100m deep. These were formed by a series of violent explosions over the last one million years. The explosions were a result of superheated gas and steam, and despite the volcanic activity, there was no lava flow. Instead of piling debris just about their vents similar to a number of other volcanoes, they discharged ash in addition to rock over afar as well as wide area. In the present day, these craters are filled with water to form very breathtaking lakes a number of which today have certain smells of sulphur in their waters.

The craters are so beautiful to look at, they make up the park’s mesmerizing and eye-catching scenery giving you beautiful views; they also offer splendid hiking experience. Great spots for swimming, nature trails which can be enjoyed as you spot some monkeys, resident birds, as well as magnificent sights, and wonderful viewpoints.

It is situated in the Mweya peninsular of Queen Elizabeth National Park, it can be explored on a 27km crater drive. Most alluring is among the Katwe Explosion Craters is the extensive Kyemengo Crater. Katwe crater lakes offer stunning scenery and breathtaking views across Queen Elizabeth National Park and also on a bright day the neighboring Ruwenzori ranges. Some of the lakes have freshwater which quenches the thirst of the animals which come down to drink. This gives the tourists an opportunity to see wildlife around this area; such as the Buffaloes and Elephants. During the crater drive you will also view Lake Edward, Kazinga channel and Lake Kitagata; and a chance to Lake Katwe which is home to Uganda’s salt factory. There are salt mines and fishing grounds around the lake; you will get a chance to see how these activities are done and also interact with the local community.

This crater field is situated in the southeastern part of Queen Elizabeth National near Kibale town; it is made up of a series of ancient volcanic craters filled with water. Explore the field and get an opportunity to experience its unique rugged landscapes, enjoy wonderful views over vast tea, fruit plantations, Ruwenzori Mountain and cultural attractions. Engage in numerous activities done in this field like; swimming, canoeing, and fishing. The lake within the crater field includes; the twin lakes of Nyanzibiri which can be found on the highway between Mbarara and Kasese. The road divides the lake creating a beautiful contrast for tourists driving along the elevated road which separates the two. These lakes are so interesting because they have different colors one is green and the other blue.

Lake Kamwezi there is a beautiful cave where the stream runs through; in the early years, it was used to sacrifices and spiritual cleansing. Those who were running away from the late Idi Amin’s torture sought refuge in this place. A cultural museum found in these caves displays every detail about the spiritual Bunyaruguru people and their interesting culture.

Lake Nkugute meaning ‘swallow’ in the local language of the Banyaruguru people. The place is full of myths, the lake was believed to have swallowed up two children a boy and a girl every year. The Kitagata Hot springs are also said to be having healing powers for every skin disease. The local people are so hospitable and always willing to share their age-old tales.

For those traveling to Fort portal and Kabale, it is the best stopover as you rest and enjoy the glance of nature around the crater fields.

This splendid crater filed is close to Kibale National Park covering an area of 10km. There are quite a number of craters to explore during a guided thrilling walk which takes you about 3 hours taking you to The famous ‘Top of the world’. The fields have the most eye-catching views of nature which leave you speechless. The Ruwenzori Mountains, Kibale rain forest and the vast tea plantations. Besides the nature walk, you can also do some mountain biking.

There are a number of lakes found within the Ndali- Kasenda craters field which include; Lake Nkuruba, Lake Lyantonde, lake Nyabikere, Lake Nyinambuga, and lake Kifuruka among others.

You can also combine the tour with gorilla trekking in Bwindi Impenetrable Forest National Park or Mgahinga Gorilla National park to get a complete exciting Uganda wildlife, Adventure, and Primates Safaris