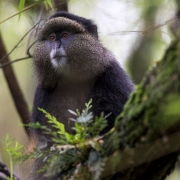 Golden monkeys are on the list of the endangered species primarily due to habitat loss and fragmentation. Deforestation is harming this tree-dwelling species, and it risks losing its forest home and food sources to agricultural expansion.

They are surviving in other 2 countries which make up the Virunga Conservation Area. Mgahinga, in Uganda, Volcanoes in north-west Rwanda and Virunga and Kahuzi-Biéga in the eastern Democratic Republic of Congo. They have a unique appearance from the rest of the other monkeys and are known to feed on lichens, young leaves, fruits or seeds, buds, mature leaves, herbs, bark, and flowers. They co-exist with other animals with in the forest like the magnificent Mountain Gorilla, buffalo, forest elephant and other species of mammals, reptiles, amphibians and birds.

Mgahinga Gorilla National Park situated in south western Uganda, Kisoro district is only park in Uganda where golden monkey tracking is done. It is known as the place where silver meets gold meaning it is a home to silverback gorillas and the unique golden monkeys. The golden monkeys are known to live in bamboo forests which Mgahinga has.

Apart from the famous gorilla trekking activity, Mgahinga is also known for Golden monkey tracking and golden monkey experience. Golden Monkey tracking is an exciting activity, as you trek in the forest in search for these creatures in their natural habitat.  For those who need to spend 1 hour you will be required to pay for tracking permit through Engagi Safaris or Uganda Wildlife Authority. It costs $60 for foreign residents, foreign non-residents and UGX40,000 for EAC this caters only  for the one hour you spend with the golden monkeys .It starts early in the morning at the park headquarters where you are briefed about the dos and don’ts during the trek in the forest and  assigned an already habituated groups. You will head into the forest in search for these beautiful creatures in company of a professional ranger guide. Chances of finding golden monkeys are high and most of them used to humans so they will not run away if they see people. Golden monkey tracking takes about 2-4 hours excluding the 1 hour you spend with the monkeys. On encountering them, you will be strictly allowed to 1 hour in their presence, ask questions, in case you want to take pictures you need to make sure you are steady and fast and very playful. Flashlight is prohibited then you will return to the headquarters.

Golden monkey experience for those who need to spend more than 1 hour with the golden monkey will pay for the experience $100 for foreign residents, foreign non-residents and UGX100,000 for EAC. This is an opportunity to spend more time with the monkeys the whole day in company of researchers as you observe their ways of life, feeding habits and acquire more knowledge. It also starts early morning at the park headquarters and you will be briefed about the rules and regulation during the activity. Then you will start the activity in company of researchers who are in charge of habituating the golden monkeys. They will take you straight to visit a particular group which is still undergoing the habituation process.  Spend the whole day in the forest with the golden monkeys. Then return to the briefing point where your driver guide will pick you and transfer you back to the lodge

Note that the weather plays a big role when searching for the golden monkeys. In the windy weather they tend to settle in tree canopies. They tend to have a problem with listening to the predator’s (eagle) movement when the wind blows the trees. Even when it rains, the monkeys do not move they try to warm themselves in the tree making it easy to be seen.

Birding In Uganda
Scroll to top