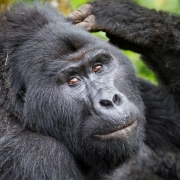 Bwindi Impenetrable Forest National Park is the most visited park for gorilla trekking Safaris in Uganda. It is nestled in southwestern Uganda covering 2 districts; Kabale, Kanungu and Kisoro. Composed of 321Km2 of both montane and lowland forest. It is endowed with natural diversity ranging from trees, birds, and animals. In 1991, it was declared as a national park and recognized as a UNESCO site in 1993. Gorillas are the most sought for animals in this park, there are 5 sectors in the park and each of them has unique and interesting gorilla families. The families are made up of silverback as the head, female black backs, juveniles and infants as seen below; 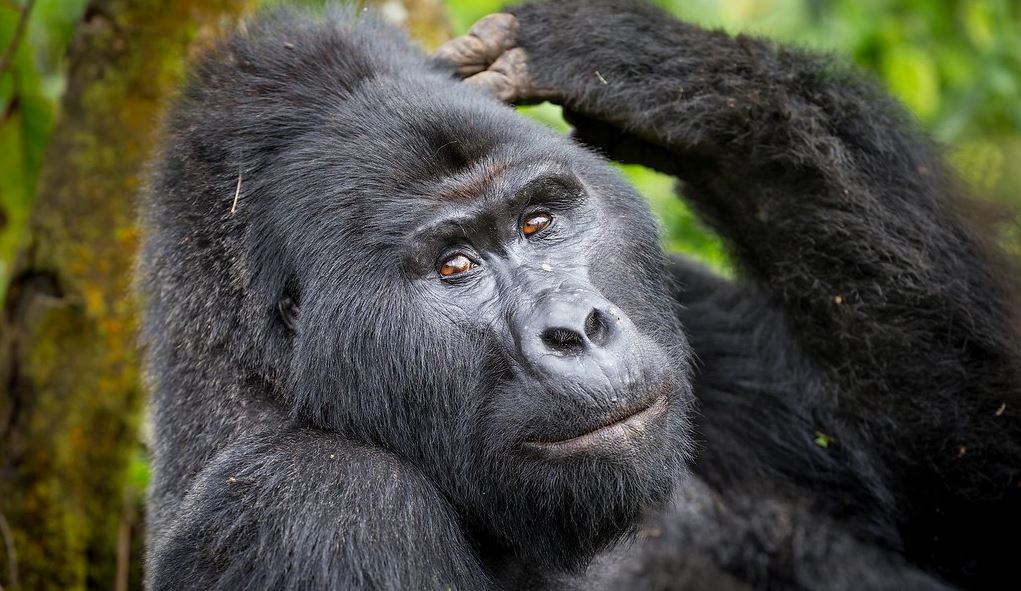 Buhoma is located in the northern part of Bwindi. This is the most tracked area because of its terrain, it is not so steep compared to other sectors. There are 3 gorilla families found in this sector as listed below.

This Mubare group was the very first group to be habituated for tracking by tourists in 1993. Mubare group is named after the beautiful Mubare Hill in which this group was discovered.

This group was habituated in 1997 for tracking and started receiving visitors in 1991. It was first discovered near a swamp in Bwindi Impenetrable. The family derives its name from the local word “Nyanja” which means water. It is a larger group of 17 led by Makara the lead Silverback.  There are also 1 black-back, 5 adult females, 1 sub-adult, 3 juveniles, and 6 infants.

However, a family was split from it named the Rushegura Group. These two groups had become rivals but they now co-exist peacefully.

In 2011 the family lost a member called Mizano who was found dead with wounds around the neck and shoulders. It was reported that he died trying to defend his family from the poachers. 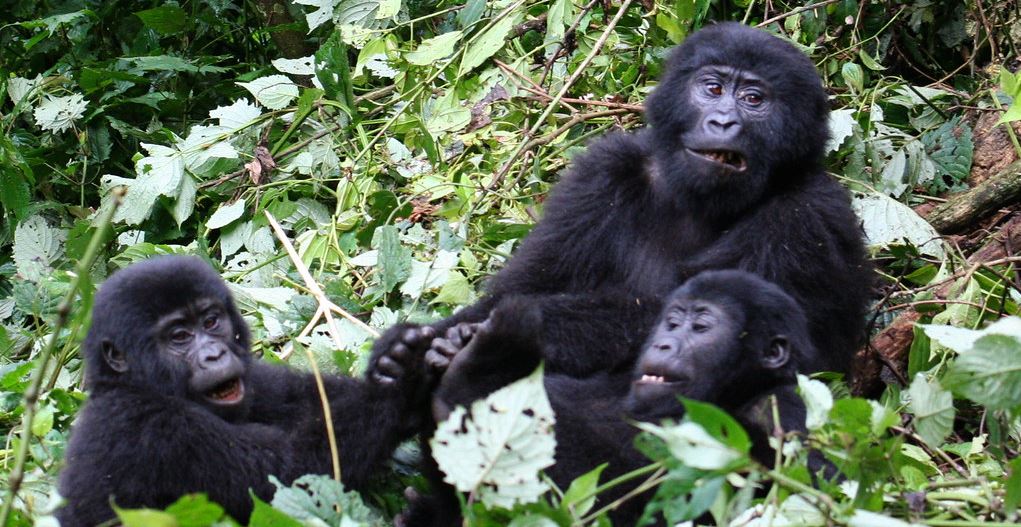 This Rushegura Group was habituated in 2000 and received tourists in the year 2002. It is a huge group within the Buhoma area of Bwindi Forest. It broke away from Habiyanja Family. For shorter Treks, this is the best gorilla family choice often tracked in less than 5 hours. However, no guarantee because the gorillas may choose to go far and it may be a long trek to catch up with them. The Rushegura Gorilla Family was led by Mwirima the silverback and comprised of 18 members. Currently, it is led by Kabukojo. Other members include 5 adult females and hosts of juveniles and infants. The group which is known to at times cross in the neighboring Democratic Republic of Congo.

The sector is located in the eastern part of the park and can accommodate 18 trackers per day. It has 3 gorilla families, 2 trekked by tourists and one for strict research.

Bitukura family is among the newest group in Bwindi Forest. It is led by Ndahura and made up of 4 silverbacks, 4 adult females, 2 juveniles and 3 infants – It is unusual to have this many Silverbacks in one group but they get along. There is so much peace and harmony in this family, It has been so easy to habituate this group compared to others.

It is composed of playful energetic juveniles and toddlers in the group that keeps visitors entertained. The Oruzogo Gorilla Family started to receive visitors in 2011 and those who came to visit them simply love this group.  It is not an extreme trek but you need endurance, steadiness

The Oruzogo Gorilla Family is led by the Bakwate and there is 1 other silverback, 2 black backs, 5 adult females, 2 sub-adults, 1 juvenile, and 5 infants

It is the only that is not visited by tourists and there a no permits issued for the Gorilla Group.  It was set aside as a Research Group studied by the German Max Planck Institute of Evolutionary Anthropology. The research is aimed at learning more about the endangered primates, their traits, characters, biology, reproduction and behaviors among others. As well as looking at the entire biology and sociology of mountain gorillas. The family was initially led by Rukina who was succeeded by an inexperienced young Silverback (Mukiza). He was ambushed by an immigrating Adult Silverback (Rukara) from the Bitukura family, this fueled a split of the family into two – (Kyaguliro A -Rukara and Kyaguliro B -Mukiza) in May of 2016. However, these groups are suspected to re-unite in the future since they leave just approximately near each other. The A&B groups are made up of Rukara which is composed of 10 individuals; 1 silverback, 2 black backs, 3 adult females, 2 juveniles and 2 infants, while the second group,  Mukiza is also made up of 10 individuals who include; 1 silverback, 4 adult females, 1 sub-adult and 4 infants.

The sector is located in the southern part of the park the biggest number of gorilla families compare to the rest of the sectors. There are 4 gorilla families and this is the only sector for gorilla habituation experience.

Nshongi family is named after the Nshongi River where the gorillas in this group were discovered some years back. It is headed by the Silverback Bweza and there is only one Silverback, 3 adult females, 1 sub-adult, 1 juvenile, and 1 infant.

This is the biggest habituated gorilla family in Uganda with 25 group members, at the opening of the group for visitors after habituation and 10 members left to form another family called the Mishaya group.

A family dispute occurred in the biggest Gorilla family in Bwindi Forest –Nshongi Gorilla family there was a split hence forming Mishaya Gorilla Family. There are 12 family members led by Mishaya with 1 dominant silverback but in the world of gorilla families again like in our human families and friendship groups that number can change. Silverbacks there is one here will bring in other females into their groups or be joined by break-away members of other groups.

The name Kahungye comes from a hill in the Rushaga area where the gorillas were first spotted. The group was opened for visitors and gorilla tracking in 2011 after habituation and comprised of 27 members. The group split into a new gorilla family called Busingye. The Family was led by Rumanzi who was succeeded by Gwigi. Currently, there is a total of 13 individuals that includes; 3 silverbacks, 3 black backs, adult females, sub-adults, juveniles, and infants.

The Busingye gorilla family split group from the Kahungye Gorilla family in August of 2012. The group currently consists of 9 members and among them were three infants and a sub-adult – gorilla teen. However, there are speculations that this group could return back to Kahungye.

This group broke away from the Nshongi family because of co-current disputes within the group at the end of 2013. The Bweza Gorilla family is led by the Silverback Kakono and is made up of 12 individuals including; 2 silverbacks, 4 black backs, 3 adult females, 1 sub-adult, and two infants.

This sector is located in the southern part of the park, it is known to be the hilliest sector and sometimes difficult to travel to this area. 4×4 vehicles are required, one is required to travel from Buhoma to Ruhija to access Nkuringo. However, it is an experience that is worth it.

The family derives its name from a hill known as Nkuringo where the gorilla members were first sighted. It led by the Silverback Rafiki and made up of 12 individuals; 2 silverbacks, 1 black back, 2 adult females, 2 sub-adults, 3 juveniles, and two infants.

It should be noted that such figures about the number of members change as gorilla babies arrive, old members, die or move to another group and other factors.

Uganda’s gorilla permit will be increased effective 1st June 2020. Foreign non- resident will be paying $700 from $600, foreign residents $600 from 500. The East African resident will be paying the same amount of 250,000shs. Gorilla habituation will also remain $1500. These permits can be obtained directly from Uganda Wildlife Authority or through your esteemed local tour operator Engagi Safaris.