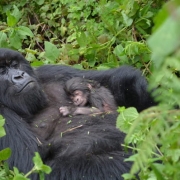 Like human mothers, mother gorillas have a huge role to play starting from conceiving to producing and raising their offspring. Although both gorilla moms and human moms share the same parenting responsibility, the mode in which it is executed may differ in one way or the other.

Like other primates, gorilla moms make very strong bonds with their young ones and provide full care for them during throughout their infant stage. The care involves nursing, carrying them to provide warmth and comfort and protecting them from any harm in the surrounding environment. Due to several hardships involved in raising infants, gorilla moms produce once in four years. Despite the effort from gorilla moms, research shows that only 75% of infant gorillas make it through the stage. 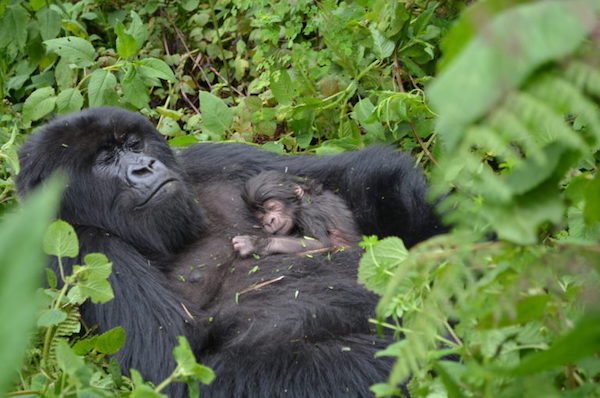 The average time for pregnancy in gorillas is about 8 and a half months just slightly less than human pregnancies. Unlike in humans, it is not easy to identify a pregnancy in gorillas by just looking at their bellies, their stomachs are naturally quite large given that they eat over 40 pounds of vegetation every day. However, researchers have identified key indicators of pregnancy in gorillas. These include changes in appetite and morning sicknesses among the expecting mothers.

3 Babysitting by non-mothers is not common

Unlike in humans and other primates who allow other individuals in the family to babysit their infants, this practice is much less common with female gorillas. Gorilla moms babysit their young ones themselves most of the time but sometimes they may allow only those females with whom they are related or older siblings to carry their baby.

Normally, female gorillas in a group depend on the leading silverback to provide general protection for the entire group including their infants who are often targeted by gorilla males from other groups. When a group disbands, due to misfortunes like death of the silverback, female gorillas transfer into another group for the same purpose. However, researchers reported a rare incident when they witnessed a mother gorilla who traveled alone with her infant after her group disbanded. This was interpreted as a move to protect her baby given that he was just 1-year-old. If the mother had transferred into another group, her baby was likely to be killed by the dominant male which would force her to start cycling again. The same mother was found after 7 months in the company of a lone silverback but without her infant. It was later discovered that her baby had died but the researchers was greatly amazed by what this mom gorilla had done to protect her infant.

5 Gorilla motherhood differs from that of humans in several ways

It is so amazing to learn that gorilla moms generally don’t put their babies down for the first six months! This is aimed at keeping the infant warm and safe and also gives the mother an opportunity to keep track of her baby during the busy moments like feeding or travelling at the same time providing comfort to the infant. In addition to the care received during day, infant gorillas also sleep in the same nest with their moms at night. However, this stops immediately the mom gets another baby usually after four years and the young ones must now learn to sleep on their own.

On average, gorilla moms nurse their infants for about three years or more while infants start testing solid food at around 5 months. They finally start eating solid food at 8 months and they keep nursing to supplement their diet for another two years.