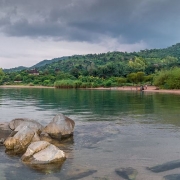 Lake Tanganyika is an African Great Lake. The name “Tanganyika” apparently refers to “the great lake spreading out like a plain”, or “plain-like lake”. It is the second-oldest freshwater lake in the world, the second-largest by volume, and the second-deepest, in all cases after Lake Baikal in Siberia. It is the world’s longest freshwater lake. The lake is shared between four countries – Tanzania, the Democratic Republic of the Congo (DRC), Burundi, and Zambia, with Tanzania (46%) and DRC (40%) possessing the majority of the lake. It drains into the Congo River system and ultimately into the Atlantic Ocean.

The major river flowing into the lake is the Ruzizi River, formed about 10,000 years ago, which enters the north of the lake from Lake Kivu. The Malagarasi River, which is Tanzania’s second-largest river, enters the east side of Lake Tanganyika. The Malagarasi is older than Lake Tanganyika, and before the lake was formed, it probably was a headwater of the Lualaba River, the main Congo River headstream.

The lake may also have at times had different inflows and outflows; inward flows from a higher Lake Rukwa, access to Lake Malawi and an exit route to the Nile have all been proposed to have existed at some point in the lake’s history.

Of the several islands in Lake Tanganyika, the most important are:

Lake Tanganyika supports a major fishery, which, depending on the source, provides 25–40%] or c. 60% of the animal protein in the diet of the people living in the region. Currently, there are around 100,000 people directly involved in the fisheries operating from almost 800 sites. The lake is also vital to the estimated 10 million people living in the greater basin.

Lake Tanganyika fish can be found exported throughout East Africa. Major commercial fishing began in the mid-1950s and has, together with global warming (limiting the habitat of temperature-sensitive species), had a heavy impact on the fish populations, causing significant declines. In 2016, it was estimated that the total catch was up to 200,000 tonnes. Former industrial fisheries, which boomed in the 1980s, have subsequently collapsed.

The lake holds at least 250 species of cichlid fish and undescribed species remain. Almost all (98%) of the Tanganyika cichlids are endemic to the lake and it is thus an important biological resource for the study of speciation in evolution. Some of the endemics do occur slightly into the upper Lukuga River, Lake Tanganyika’s outflow, but further spread into the Congo River basin is prevented by physics (Lukuga has fast-flowing sections with many rapids and waterfalls) and chemistry (Tanganyika’s water is alkaline, while the Congo’s generally is acidic). The cichlids of the African Great Lakes, including Tanganyika, represent the most diverse extent of adaptive radiation in the vertebrates.

Lake Tanganyika is home to more than 80 species of non-cichlid fish and about 60% of these are endemic. The open waters of the pelagic zone are dominated by four non-cichlid species: Two species of “Tanganyika sardine” (Limnothrissa miodon and Stolothrissa tanganicae) form the largest biomass of fish in this zone, and they are important prey for the forktail lates (Lates microlepis) and sleek lates (L. stappersii). Two additional lates are found in the lake, the Tanganyika lates (L. angustifrons) and bigeye lates (L. mariae), but both these are primarily benthic hunters, although they also may move into open waters. The four lates, all endemic to Tanganyika, have been overfished and larger individuals are rare today.