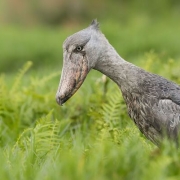 The famous birding spot in Uganda, Mabamba wetland is situated in the western part of Entebbe on the northern shore of Lake Victoria. The wetland covers an area of 2,424 ha consisting of thick marshes of papyrus, water lilies, and other wetland grasses. It is a recognized UNESCO site and an Important Birding Area.

The shoebill stork has made Mabamba Wetlands famous. Birders from all over the world visit Uganda mabamba swamp in particular eager to see this ancient bird in its natural habitat. It is most common near lake areas of Africa but mostly seen in large numbers in Uganda. The shoebill stork gets the name from its shoe like head, some people refer to it as the ugliest bird because of its ancient look. Adult Shoebills weighs about 14 pounds and can live for more than 50 years. It is a shy and solitary bird, 2 shoebills are rarely seen together unless it is mating time.

The period between September and March are the best for birding. However, the shoebill can be seen all year round and the whole day. But the best time is during the morning as they search for food. They mostly feed on fish smaller water birds, water snakes, frogs, lizards, Turtles, Crocodiles (young), Snails, Rodents, frogs which are abundant in the swamp.

On arrival, you will pay a $7 community charge payable at the wetland office. $35 for the boat and local guide. A life Jacket is highly recommended for safety. This money paid is away and is giving back to the community and helping save the birds and other creatures in the wetland. People are less inclined to destroy something that is of a benefit to them.

Besides birding, there are other activities done at Mabamba like; sport fishing, village walk, butterfly watching, canoeing and spotting the sitatunga antelope.

The swamp can be accessed from Kampala, Entebbe, and Masaka.

From Entebbe, you can follow the old Entebbe- Kampala road and branch off from Kisubi. Then drive to Nakawuka to Kasanje and reach Mabamba.

From Masaka road, you branch off after about 30 kilometers to Buyer. The distance from Buyege to Mabamba is about 22km.

A boat ride to mabamba is highly recommended, it is the shortest and most exciting journey, you will have a chance to enjoy the cool breeze of Africa’ largest Lake Victoria as you see numerous water birds. The ride takes about 45-50 minutes.