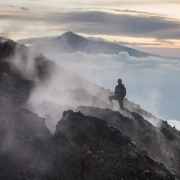 Mount Nyiragongo is an active stratovolcano with an elevation of 3,470 m (11,380 ft) in the Virunga Mountains associated with the Albertine Rift. It is located inside Virunga National Park, in the Democratic Republic of the Congo, about 20 km (12 mi) north of the town of Goma and Lake Kivu and just west of the border with Rwanda. The main crater is about two kilometers wide and usually contains a lava lake. The crater presently has two distinct cooled lava benches within the crater walls – one at about 3,175 m (10,417 ft) and a lower one at about 2,975 m (9,760 ft). Nyiragongo’s lava lake has at times been the most voluminous known lava lake in recent history. The depth of the lava lake varies considerably. A maximum elevation of the lava lake was recorded at about 3,250 m (10,660 ft) prior to the January 1977 eruption – a lake depth of about 600 m (2,000 ft). A recent very low elevation of the lava lake was recorded at about 2,700 m (8,900 ft). Nyiragongo and nearby Nyamuragira are together responsible for 40% of Africa‘s historical volcanic eruptions.

The volcano partly overlaps with two older volcanoes, Baratu and Shaheru, and is also surrounded by hundreds of small volcanic cinder cones from flank eruptions.

The lava emitted in eruptions at Nyiragongo is often unusually fluid. Nyiragongo’s lavas are made of melilite nephelinite, an alkali-rich type of volcanic rock whose unusual chemical composition may be a factor in the unusual fluidity of the lavas there. Whereas most lava flows move rather slowly and rarely pose a danger to human life, Nyiragongo’s lava flows may race downhill at up to 100 km/h (60 mph). This is because of the extremely low silica content (the lava is mafic). Hawaiian volcanic eruptions are also characterized by lavas with low silica content, but the Hawaiian volcanoes are broad, shallow-sloped shield volcanoes in contrast to the steep-sided cone of Nyiragongo, and the silica content is high enough to slow most Hawaiian flows to walking pace

Not much is known about how long the volcano has been erupting, but since 1882, it has erupted at least 34 times, including many periods where activity was continuous for years at a time, often in the form of a churning lava lake in the crater. The existence of the lava lake had been suspected for some time but was not scientifically confirmed until 1948. At that time, it was measured at nearly 120,000 square meters (1,300,000 sq ft). Subsequent expeditions showed that the lake fluctuated in size, depth, and temperature over time.

Planning for Congo gorilla safaris to encompass the climbing of mountain Nyiragongo in Congo? Engagi Safaris offers the best safari packages to hike this active volcano in Africa.