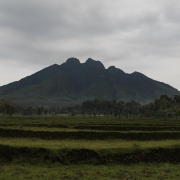 Mount Sabyinyo (“Sabyinyo” is derived from the Kinyarwanda word “Iryinyo”, meaning “tooth”; also “Sabyinyo, Sabyinio”) is an extinct volcano in eastern Africa in the Virunga Mountains. Mount Sabyinyo is the oldest volcano of the range. It is north-east of Lake Kivu, one of the African Great Lakes, and west of Lake Bunyonyi in Uganda. The summit of the mountain, at 3,669 meters (12,037 ft), marks the intersection of the borders of the Democratic Republic of the Congo (DRC), Rwanda, and Uganda, and holds religious significance to local tribes. It also is within the adjoining national parks established by these countries: Virunga National Park in the DRC, the Volcanoes National Park in Rwanda, and Mgahinga Gorilla National Park in Uganda.

The slopes of Mt. Sabyinyo are a habitat for the critically endangered mountain gorilla. The mountain carries the local nickname “Old Man’s Teeth,” because its serrated summit resembles worn teeth in a gum line (in contrast to the perfect conical summits of the adjacent mountains in this range).

Mount Sabyinyo is also the hardest to climb among the Virunga ranges, though hard to climb it offers breathtaking views of the panoramic Virunga Range at an angle of about 360.

Mount Sabyinyo can be reached from Rwanda, Uganda and the Democratic Republic of Congo. The time it takes to travel will depend on the country you are in.