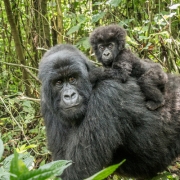 Have you ever wondered how gorillas move from one place to another in their habitat while trying to carry out their daily routines like feeding and playing along with their infants?

Well, unlike in humans who have one mode of movement (bipedally) or walking on two legs, gorillas have got several modes of movement that they use according to the situation and stage they are facing. The movement mechanisms among gorillas are very important to their survival in their habitat since occasionally these apes are required to switch from one movement mode to another in order get what they need at that moment like food and maybe fleeing from danger.

Here are the different mechanisms associated with movement in gorillas;

Although gorillas are assumed to be always wondering in the forests looking for food especially, the abundance of food sources in their habitat saves them from this burden. Gorillas also eat many different types of plants which helps them not to travel far distances looking for food. Contrary to what many people think, mountain gorillas travel less than one mile per day on average.

Although mountain gorillas are primarily terrestrial, occasionally these great apes do climb trees. Gorillas use all their four limbs to grasp when climbing trees or other objects. Gorillas and other non-human primates are blessed with feet that are uniquely adapted for climbing, using their special big toe which functions similarly to the human thumb. The other toes are also long enough and dexterous to do a great job.

Unlike humans, gorillas can use both their hands and feet to walk. The unique feature about this locomotion aspect of gorillas is that they do knuckle-walking, which means that they walk on top of their knuckles rather than putting all their weight on their palms.

Although gorillas are known to walk exclusively quadrupedally (on both feet and hands), sometimes they can be seen walking on two legs or bipedally. This form of walking is mostly seen in juveniles when they are playing or carrying infants or when are trying to observe something in the distance. For adult gorillas, bipedal walking is rare though occasionally they may run bipedally for a few steps during a display.

Just like human babies, infant gorillas need a lot of support when they are born. Initially, the youngsters lay on their mother’s stomach as she supports with one arm while walking tripedal (on three legs). After they grow and gain some strength to grasp on, the mother can go back to walking normally on all four legs (quadrupedally). Finally, infants can start climbing straight to their mom’s back when they have grown strong enough. They can also start enjoying short rides on their siblings if their mom allows them to be carried. Sometimes gorillas also carry out “leg carrying”, where a mother allows her infant to sit on her foot and grasp onto her leg when she starts moving.

Where to find mountain gorillas

Rwanda reopened for tourism with discounted gorilla permits for nationals and...