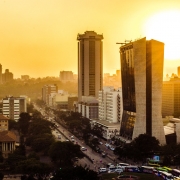 The famous Nairobi City is Kenya’s capital and largest city covering an area of 696 square kilometers (270 sq mi) adjacent to the eastern edge of the Rift Valley. The city is popularly referred to as the Green City in the Sun which is derived from the city’s foliage and warm climate. Lying on the River Athi in the southern part of the country, and has an elevation of 1,795 meters (5,889 ft) above sea level.

Nairobi experiences a subtropical highland climate, evenings may be cool, especially in the June/July season, when the temperature can drop to 9 °C (48 °F). The sunniest and warmest part of the year is from December to March when temperatures average in the mid-twenties Celsius during the day. The mean maximum temperature for this period is 24 °C (75 °F).

It has two seasons a year rainy and dry. There are two rainy seasons, but rainfall can be moderate.

The city derives its name from the Maasai phrase Enkare Nairobi, which translates to “cool water”, relating to the Nairobi River which flows through the city. The estimated population as of 2019 census is 4,397,073 in the 2019 census and the metropolitan area has a population of 9,354,580.

This city was founded by the colonial masters in 1899 as a rail store during the construction of the Uganda Railway. Since then it continued to grow and replaced Mombasa as the capital city of Kenya in 1963 after independence.  The city turned into a center for the industry of colonial coffee, tea, and sisal during the colonial times. 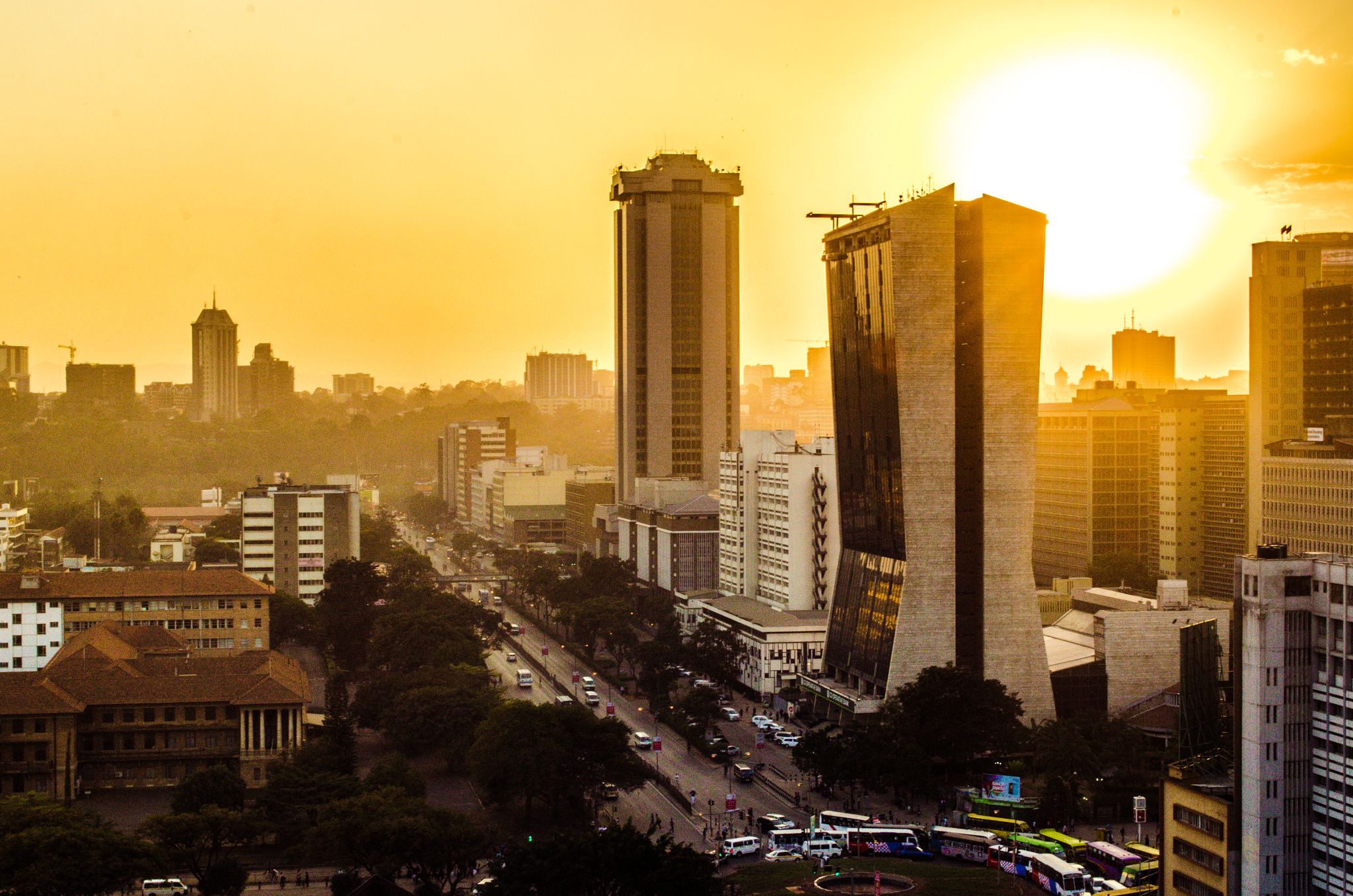 Currently, Nairobi is an established hub for business and culture, it a base for many Kenya business enterprises, international organization and companies. The United Nations Environment Programme (UN Environment) and the United Nations Office at Nairobi (UNON), The Nairobi Securities Exchange (NSE) is one of the largest in Africa and the second-oldest exchange on the continent. It is Africa’s fourth-largest exchange in terms of trading volume, capable of making 10 million trades a day.

There are quite a lot of tourist attractions in the mesmerizing city which has made it a safari capital of the World because of Nairobi’s prominence as a hub for safari tourism. Some of them include;

Situated to the west of the city, is the eminent geographical feature of the Nairobi area. Other physical features include; Mount Kenya is situated north of Nairobi, and Mount Kilimanjaro is towards the south-east.

Recreation parks and open spaces for relaxation. The city is covered with green with shades Uhuru park being the common park around which was constructed by former President Daniel Arap Moi. Others include; Jeevanjee Gardens, City Park, 7 August Memorial Park, and Nairobi Arboretum. 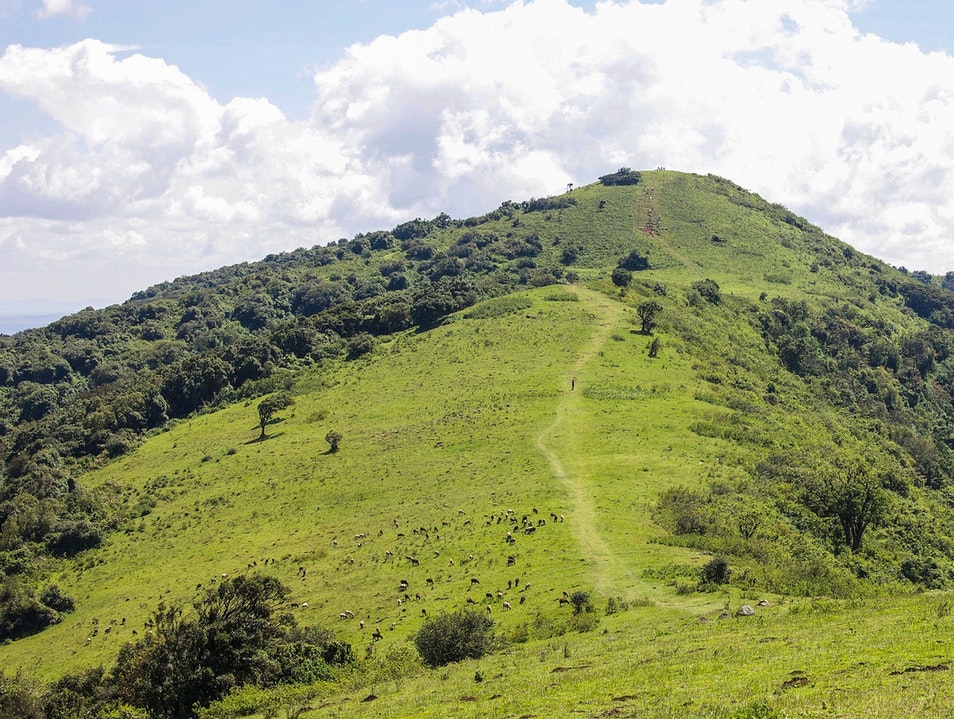 Nairobi National Park is the only city park in the world. It is endowed with a great number of wildlife such as birds, animals, and great sceneries. The park gives the city a spectacular view of city traffic and nature at the same time.

Nairobi has a highly developed transport system ranging from airports, roads, trains, and ships.The development of these critical transport systems has helped to reduce the transport costs due to faster movement of goods and people within the region, also increase trade, improve the socio-economic welfare of Northern Kenya and boost the country’s potential in attracting investments from all over the world. Jomo Kenyatta International Airport is the largest airport in Kenya which handles domestic and international flights. It is the busiest airports in East Africa, Wilson Airport being the general-aviation airport handling smaller aircraft, mostly propeller-driven and the military base airport Eastleigh Airport.

Kenya has the most developed railway system in East Africa. The new Mombasa-Nairobi Standard Gauge Railway connects the port city of Mombasa and Nairobi. The new railway line has virtually replaced the old meter-gauge railway. The Nairobi Terminus is located at Syokimau, some 20 km from the city center. Passengers traveling from Mombasa have transferred the short distance into the CBD with the meter-gauge trains.

The roads are well tarmacked, the highways connect the city with other major towns such as Mombasa, Machakos, Voi, (A109), Eldoret, Kisumu, Nakuru, Naivasha, and Namanga Border Tanzania. The roads also have flyovers, and bridges still constructing more which helps to reduce the traffic levels which have been a great concern in the city.

The Real Estate in Nairobi is growing at a high speed, villas and apartments are being constructed at this development, including leisure, retail and commercial facilities.  Eastlands also houses most of the city’s middle class and includes South C, South B, Embakasi, Buru Buru, Komarock, Donholm, Umoja, and various others.

Accommodation Facilities are being put in place mostly luxurious and mid-range hotels. This is mostly due to the growing number of tourists who visit Kenya Nairobi city in particular for city and wilderness tours. The hotels provide excellent customer care, comfortable spacious beds, serve delicious meals and good ambiance.

Some of the best facilities in Nairobi are; Hemingways Nairobi, Villa Rosa Kempinski,