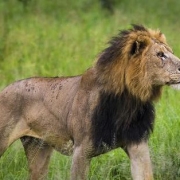 Tanzania has also launched ”Be The Pride” campaign on the African lion, you can check it out now live at Bethepride.com in Swahili and English. Currently, the African lions are endangered like never before, Tanzania is a home to 40% of the world’s remaining wild lions and a leading conservation leader for a longtime. Apparently the survival of the lions is threatened by a number of factors – 60% of them live outside of protected areas, where they are vulnerable to habitat loss, human-wildlife conflict and the bush meat trade.  Across Africa, the number of wild lions has halved in just the last 20 years to about 20,000. Due to such circumstance, Tanzania has launched this campaign to fight against the lion poachers and ensure increased number of lions. It could be lion advocates like Julius and Mandela, who worked to stop the natural hunting of lions, or the working mother, Yamat, who gathers invaluable information that helps his organization make effective decisions to prevent lion attacks; or Portuguese, who educates herders about how to care for their animals more effectively and in a less harmful way to lions’ habitats.