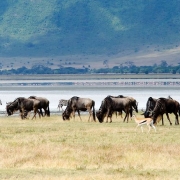 The 2009 Ngorongoro Wildlife Conservation Act placed new restrictions on human settlement and subsistence farming in the Crater, displacing Maasai pastoralists, most of whom had been relocated to Ngorongoro from their ancestral lands to the north when the British colonial government established Serengeti National Park in 1959.

The main feature of the Ngorongoro Conservation Authority is the Ngorongoro Crater, the world’s largest inactive, intact and unfilled volcanic caldera. The crater, which formed when a large volcano exploded and collapsed on itself two to three million years ago, is 610 meters (2,000 feet) deep and its floor covers 260 square kilometers (100 square miles). Estimates of the height of the original volcano range from 4,500 to 5,800 meters (14,800 to 19,000 feet) high. The crater floor is 1,800 meters (5,900 feet) above sea level. The crater was voted by Seven Natural Wonders as one of the Seven Natural Wonders of Africa in Arusha, Tanzania in February 2013. The Ngorongoro volcano was active from about 2.45 to 2 million years ago.

The Ngorongoro Conservation Area also protects Oldupai or Olduvai Gorges, situated in the plains area. It is considered to be the seat of humanity after the discovery of the earliest known specimens of the human genus, Homo habilis as well as early Hominidae, such as Paranthropus boisei.

Approximately 25,000 large animals, mostly ungulates, live in the crater. Large mammals in the crater include the black rhinoceros, the local population of which declined from about 108 in 1964-66 to between 11-14 in 1995, the African buffalo or Cape buffalo, and the hippopotamus. There also are many other ungulates: the blue wildebeest (7,000 estimated in 1994), Grant’s zebra (4,000), the common eland, and Grant’s and Thomson’s gazelles (3,000). Waterbucks occur mainly near Lerai Forest.

Cheetah, East African wild dog, and African leopard are rarely seen. Spotted hyenas (Crocuta crocuta) have been the subject of a long-term research study in the Ngorongoro Conservation Area since 1996.

Although the thought of as “a natural enclosure” for a very wide variety of wildlife, 20 percent or more of the wildebeest and half the zebra populations vacate the crater in the wet season, while Cape buffalo (Syncerus caffer) stay; their highest numbers are during the rainy season.

Since 1986, the crater’s wildebeest population has fallen from 14,677 to 7,250 (2003-2005). The numbers of eland and Thomson’s gazelle also have declined while the buffalo population has increased greatly, probably due to the long prevention of fire which favors high-fibrous grasses over shorter, less fibrous types.

Lake Magadi, a large lake in the southwest of the crater, is often inhabited by thousands of mainly lesser flamingoes.

The crater has one of the densest known population of lions, numbering 62 in 2001.