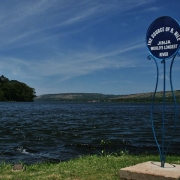 THE SOURCE OF RIVER NILE.

The Nile is known as the longest river in World with almost 6,700 km and the only river that flows northwards in Africa on its journey to the Mediterranean Sea. The Blue and White Nile are the 2 major of the Nile. This river has a lot of ancient history and archaeological sites along its shores. It flows in 11 African countries: Uganda, Sudan, Ethiopia, Egypt, Burundi, Eritrea, South Sudan, Rep. of Sudan, DRC, Rwanda, and Tanzania. It has fertile soil on the shores which has enabled many farmers to practice agriculture and a source of water to mainly the desert countries where it flows.

The Blue Nile originates at Lake Tana in Ethiopia flowing to the west across Ethiopia and northwest into Sudan. It supplies about 80% of the water in the Nile during the rainy season. A total length of 1,450km, 800km are in Ethiopia. The northern section of the river flows almost entirely through the desert into Egypt.

The source of the Nile also known as the White Nile starts from the eastern part of Lake Victoria in Jinja District of Uganda 50kms from Kampala the Capital City. In August 1858 explorer John Hanning Speke became the first European to discover the source of the Nile and there’s a landmark in the water identifying the source. The Nile leaves this largest lake of Africa at Ripon Falls near flowing about 500Km in the northern direction. However, the discussion about the right source is still going on. Since 2006 the British discoverer Neil McGrigor claims having found the most distant source in Rwanda, at the beginning of the Kagera River with its mouth in the western part of Lake Victoria.

There are quite a number of adventurous and drag activities done at the Nile in Uganda like Nile boat cruise (sunrise and sunset), bungee jumping, White water Rafting, kayaking, horse riding, game fishing, and squad biking.

As the Nile flows through Lake Albert in Uganda, it forms the Albert Nile which is a 130-mile section of the White Nile. Lake Kyoga also feeds the Nile with fresh waters hence forming magnificent Murchison falls. This is the river’s crown glory, it funnels through a narrow fissure in the Rift Escarpment to erupt out of the other side in a crashing 43 meters plume of white water. The falls are found in Murchison Falls National Park and Karuma Falls which is inaccessible by boat or walking because of the huge rocks and falls. While at Murchison you can enjoy a great boat cruise on Victoria Nile to the bottom of the falls. Below the falls is no less spectacular in its own way, with its profuse birdlife, thousands of hippos, and outsized, gape-mouthed crocodile. A few miles from the northern tip of Lake Albert where the Albert Nile begins, the lake receives the flow of the Victoria Nile which drains Lake Victoria. Lake Albert also receives the flow of the Semliki River in Semliki National Park at its southern end. The Albert Nile is the last part of the river in Uganda in the northeast and ending at the border with Sudan. In Sudan the name of the river changes to Bahr el Jebel or River of the Mountain, or Mountain Nile.