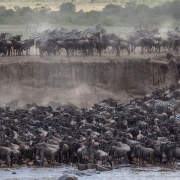 The wildebeest migration is one of the world’s seven wonders which takes place every year and nowhere else in the world but in Kenya (Masai Mara National Park) and Tanzania (Serengeti National Park). It is a wonderful experience and worth witnessing as millions of wildebeests, a thousand zebras, elands, and gazelles cross River Maara in search of green pastures and water uncertain of their survival in the water because of the presence of crocodiles. The migration occurs within an area that is known as the “Serengeti ecosystem.” The 40,000-square mile area is defined by Masai Mara National Reserve in the north and, in the south, Ndutu, Ngorongoro Conservation Area and Maswa Game Reserve in Tanzania. The central, eastern and western areas include Grumeti Reserve, Loliondo, the official Serengeti National Park including part of the southern expanse of Kusini and other protected areas.

Many ask themselves how the animals know that they have to move, the evidence of the wildebeest’s fossils indicates that these animals have been roaming the plains of East Africa for over one million years. The same manner they sense that a lion is going to attack and it runs, might be the same instinct that tells them to migrate which they have done for so many years.

Once the rainy season is over, the south and eastern plains of the Serengeti dry out, prompting the beginning of the migration. The best chance of seeing the wildebeest migration in the Serengeti is during June and July and the time to see the wildebeest calving is late January to February. The southern and western circuit parks are best visited during the Dry season (June to October), unlike the more popular northern circuit parks that can be visited year-round.

The migration from Serengeti usually starts in April or May, Waterholes on the Serengeti plains continue to dry out as winter advances, while over a million wildebeest grazing soon crops the grasslands to stubble. The herds must keep moving, heading north in search of food and water although not all as one group. Over two million animals migrate from the Serengeti National Park in Tanzania to the greener pastures of the Masai Mara National Reserve in Kenya during July through to October is considered the best time of the year to visit the Masai Mara. Game viewing is optimal at this time as there are a number of predators and prey encounters. A big number of wildebeest arriving in the Masai Mara area is staggering, as is the variety of resident wildlife – zebra, giraffe, buffalo, elephant, hyena, lion, eland and gazelle to name a few. From August until the summer rains start in November, the Masai Mara is lush and green and offers a favorable environment to the animals.

Over a period of about three weeks in February, several hundred thousand calves are born. Pregnant wildebeest give birth more or less simultaneously so expect to see calves from a few hours to a few days old whilst on game drives. You might even witness a birth – unlike other antelope, wildebeest do not hide their newborns but encourage them to get on their feet immediately and join the herd where there is safety in numbers. There is a very high probability of witnessing a kill on a game drive in this period. The calves are easy prey for Africa’s big predators: lions, cheetahs, leopards, spotted hyenas, and rare wild dogs.