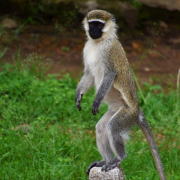 Kyambura wild life reserve is located on the north eastern part of Queen Elizabeth national park not far from the park’s headquarters. The reserve is famous for chimpanzee tracking and habituation. Tourists who have ever been to kyambura wildlife reserve testify to it as the best chimpanzee habituation site, it’s unfortunate that few people go to the reserve because its hidden deep in the rain forest. Kyambura wildlife reserve was reserved with an aim of serving as a buffer a zone for animals that used to come in the forest during dry seasons to quench their thirsty from the kyambura gorge.

Matheniko wildlife reserve is located in Karamoja region north of Moroto along the Kenya boarder near Kidepo valley national park. The reserve is bounded on the east by the great rift escarpment which forms the Uganda/Kenya boarder. It is situated in the northeastern part of Uganda, covering an area of 590 square miles. Matheniko wildlife reserve is part of the Karamoja wildlife reserve protection zone. The zone consists Kidepo valley national park, Pian Upe and Bokora. The reserve is known for its unique landscape, rocky outcrops, vegetation and mountain. The region is semi-arid with high temperatures with little or no rain fall throughout the year. It is located southeastern part of Kidepo valley national park, away from the park near Kenyan boarder. The reserve is a good spot for game drive due to the availability of the cheetah, hyena, Uganda kobs, waterbucks, buffalos, wild cats, mountain reedbucks, blue duikers and chimps like olive baboons, vervet monkey, patas monkeys among others.

Ajai wildlife reserve is located in northeastern Uganda dominated by a large island surrounded by seasonally flooded swamps and wooded savannah. It lies on the western bank of the white nile, approximately 40 kilo meters east of Arua. It was first gazetted to protect the white rhinos before it was gazetted in 1965 as a wildlife reserve. The major aim of the reserve was to protect the extinct white rhinos that were been poached by poachers, in 1962 the anti-poaching project was introduced with the support from the World Wildlife Fund but produced no results. The reserve was named after local chef Ajai who loved and protected animals in the region. 12 kilo meters of the reserve were cut off in 2002 and given to people for settle, later in 2008 the reserve was privatized by the Uganda wildlife Authority. It’s unfortunate that the reserve is less visited by tourists

Toro-Semuliki wildlife reserve is located in western Uganda in Bundibugyo district on Uganda Congo border. The park begun as a forest reserve in in 1932 but later in 1993 it became a national park. It is bordered by Rwenzori mountains on the south eastern side and the lake Albert in the northern side. Semuliki national park is known as the birder’s haven with over 400 bird species. There are over 50 mammal species in the park. The park faces a challenge of encroachment from the locals around the park who hunt animals, cut down tree for firewood and herbs. There are tribes which live near the park, they include; the Bakonjo and Bamba, the Batuku and the Batwa. The Bamba are farmers who grow crops at the foot of Rwenzori mountains.

The park is situated in one of Africa’s most ancient and bio-diverse forests. The park is a good place for those interested in hiking as they see flora and fauna, different bird species like long-tailed Hawk, red-billed Helmet shrike among others.

Katonga wildlife reserve is situated in western Uganda along the banks of river Katonga, named after Katonga river. It was established in 1998 covering an area of approximately 211 square kilo meters. The reserve is located in Ibanda and kamwenge districts, bordering Biguli subcounty and Mpara subcounty in Kyenjojo district. The vegetation of the reserve is a mixed savannah with acacia woodlands. The reserve has permanent and seasonal wetlands.

Katonga wildlife reserve harbors over 150 bird species and over 40 species of animals. These include; elephants, colobus monkeys, warthogs, waterbucks, reedbucks, sitatunga Antelopes, Uganda kob, olive baboons among others. The reserve is approximately 200km which is about 4-5 hours from Kampala city.

In 2015, 5 zebras and 60 impalas were translocated to the reserve to boast animal population and tourism. Currently, there are over 300 impalas in Katonga wildlife reserve.

Bokoro corridor wildlife reserve was established in 1964 with an aim of ensuring freedom movement for the animals during their migration between Matheniko plains and Pian Upe game reserve. The reserve was originally part of central and south Karamoja controlled hunting grounds. The reserve is relatively dry with inselbergs, typical f the southern Karamoja. Bokoro corridor wildlife reserve is covered with wooded grassland savanna on the marginal land, making it impossible for settlement and farming.

The reserve harbors a wide range of animals from the antelopes, spotted hyena, leopards, eland, Taurotragus oryx, Uganda kob, hartebeests, topi, mountain reedbuck, kob thomasi and so many others.

Kigezi wildlife reserve was established in 1952 situated on the western arm of the central African rift valley south of Queen Elizabeth National Park. The reserve is located in Rukungiri district cover an area of approximately 265 square kilometers, the reserve is largely covered with vast plains, forests and savanna woodland and open grassland. Kigezi is dotted with acacia and Albizia, deciduous forests and so much more flora. Kigezi wildlife reserve has a wide range of mammals which include; Lions, leopard, elephants, topi, oribi, bushbucks, waterbucks, giant forest hogs, hippos among others. The reserve acts as a barrier between the ishasha area of queen Elizabeth national park and Maramagambo forest

The reserve is known for harboring a large population of elephants which roam around the region, these come from the Rwindi plains in the democratic republic of Congo and from the south of queen Elizabeth national park. the elephants move mostly during rainy seasons

Bugungu wildlife reserve was first established as a controlled hunting ground in 1963. The reserve is located between Murchison falls national park and the shores of north shore of lake Albert. It is a small protected eco-system area situated in north-western Uganda, and part of Murchison falls conservation area.

For any tour to one of Uganda’s wildlife reserves, contact ENGAGI SAFARIS for the best tour experience.