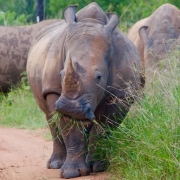 This stunning Rhino and Wildlife Ranch is situated in Nakasongola district near Nakitoma Village approximately 180km and a 3-hour drive from Kampala along the Kampala -Gulu highway. It is this is about half of the journey to Murchison Falls National Park.

Covering an area of 70sqkm surrounded by a 2m (6.6 ft) electric fence to keep the rhinos in and the intruders out. 78 park rangers and security guards keep a 24-hour watch on the rhinos to ensure their safety and protected from human and non-human predators and

The Black Rhinoceros (Diceros bicornis michaeli) and the Northern white rhinoceros (Ceratotherium simum cottoni) indigenous to Uganda faced extinction due to excessive poaching during the 1980’ due to the wars. In 2005 the sanctuary was established and it is the only home for the surviving wild Rhino in Uganda. This project is overseen by Rhino Fund Uganda a Ugandan NGO, and Ziwa Ranchers Limited, a private land management company and Uganda Wildlife Authority. The long-term goal of the sanctuary is to “build a sustainable rhinoceros population and relocate rhinos back to their original habitat in Uganda’s protected areas”.

The success story for the ranch is it started with a total of six animals, four that were bought from Solio Ranch in Kenya and two donated from Disney’s the Animal Kingdom in Orlando, Florida, in the United States, the rhino population had grown to thirteen as of June 2013. Following the birth of another calf in April 2014, the total rhino population at Ziwa Ranch rose to 15. As of March 2018, the rhino numbers at the sanctuary had increased to twenty-two animals. The ranch gates were open to the public in 2010 to enjoy these majestic animals at a fee as the project proceeds. Tourists flock the sanctuary to see the Rhinos and also do other extra activities.

As earlier mentioned above, it is the only place where you can track rhinos on foot; it is really great and exciting as you watch the white rhinoceros. This is an awesomely unique activity that grants you a chance to see rhinos on foot; this involves watching them up close and at a safer distance. With the guidance of skilled ranger guides, you can get closer to them about 6 to 7 m, you can take as many photos as you want and observe these endangered rhinos feed in their habitat.

Exploring the sanctuary on a nature walk is another exciting activity. It can take a half-day or full-day as you hike through the sanctuary. On your way, you will see quite a number of animals besides the Rhinos. Some of these include: monkeys, antelopes, hippopotamuses, crocodiles, and numerous bird species and butterflies

This half or full-day activity can be done on foot or on the boat. The sanctuary is home to over 350 bird species. Professional experienced bird guides will guide you through the entire activity. Bird species that can be seen include; the Blue-spotted dove, the Shoebill stork, Abdim’s stork, and African black crake to mention a few.

The sanctuary has tourist facilities like safari lodge, guest house, budget accommodation, and campgrounds. The accommodations are two separate businesses and both have restaurants that offer meals to tourists.

Amuka Safari Lodge is a prestigious facility that provides comfortable tented cottage rooms and delicious meals. Not forgetting the swimming pool which cools off the heat after a great rhino Trek.