Mgahinga Gorilla National Park is Uganda’s smallest mountainous national park covering an area of 33.7km2 perched in Kisoro district on the border of Uganda, Rwanda, and DR.Congo.  The park is made up of 3 splendid volcanoes; Mt. Muhavura (4,127 m), Mt. Gahinga (3,474 m), and Mt. Sabinyo (3,645 m).

The park derives its name from Mt. Gahinga a volcanic mountain which is a Rufumbira word meaning a pile of stones, it was established as a national park in 1991 under the management of Uganda Wildlife Authority.  It is also part of the 434km2 Greater Virunga Conservation Area which unfolds in 3 countries namely Uganda (Mt. Mgahinga Gorilla National Park), Rwanda (Volcanoes National Park) and DRC (Virunga National Park).

The park is mainly covered with forest vegetation on the slopes providing a refuge for mountain plants and animals, which moved up or down the slopes as the climate became warmer or cooler. The park is home to a diversity of wildlife the main one being the world’s critically endangered mountain gorillas and they are the main reason why the park was gazetted. Other wildlife includes; buffalo, forest elephant, golden monkeys, reptiles, butterflies, amphibians and birds. Besides wildlife, the park also has a great scenic view. 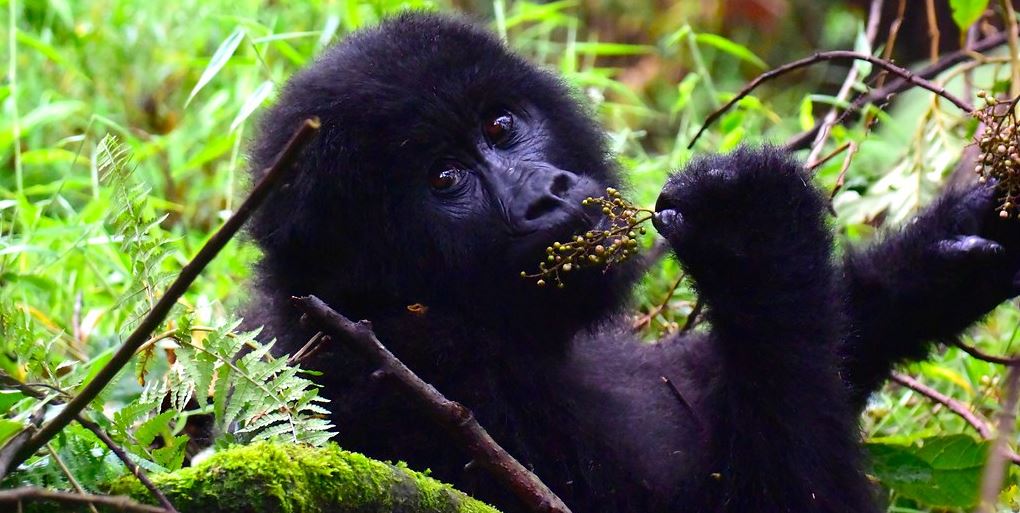 The park can be visited all year round however, the best time to do a  gorilla trekking activity is during the dry months of June-October and December to March.  The park experiences two rainy seasons; March-May and September-November. October is the wettest month, with 250mm of rain and July the driest with just 10mm.

In October 2019, there was a recent Gorilla Migration from Rwanda’s Volcanoes National Park to Uganda’ Mgahinga Gorilla National Park. A gorilla family from Rwanda is said to have moved to Uganda and its return has not yet been known. This affected gorilla trekking activity in Rwanda since there were few gorillas left for the tourists.  However, this has also ever happened to Uganda when Mgahinga National Park gorillas always moved from Rwanda to DRC it was so hard to trek them in Uganda, fortunately, they have now settled in Uganda for some good time.

ATTRACTIONS IN THE MGAHINGA NATIONAL PARK

Mgahinga Gorilla National Park is one of the homes to the endangered mountain gorilla besides Bwindi Impenetrable Forest National Park in Uganda. Uganda has three-quarters of the world’s remaining Mountain Gorillas. These unique magnificent creatures are known for living in thickly forested highlands because they are rich in food and safe this is the reason as to why they can be found in Mgahinga. The park was mainly gazetted to protect the gorillas from extinction.

The three Virunga volcanoes namely; Muhabura, Mgahinga, and Sabyinyo create mesmerizing background eye-catching scenery. Sabyinyo is a local word that comes from the word ‘Iryinyo’, meaning tooth. Sabinyo has three peaks and shared by three neighboring countries; Rwanda, Uganda, and DRC meet on this summit. Mgahinga; this is the volcanic mountain where the park’s name derived. It will take you 6 hours to climb from Ntebeko the park headquarters to Mount Gahinga peak. Muhabura rewards you 5 hours hike from 1700mm to over 4100m to this classic volcanic cone is capped by a small lake

The park protects both unique golden monkeys and mountain gorillas hence the slogan “where Silver meets Gold“. The golden monkeys are a rare species of the ancient group known as Old World monkeys. They have been known to live in smaller groups of only a few individuals with only one male as the head. The females tend to guard one territorial region while the males may mate and then travel pack-to-pack. These monkeys are currently only surviving in the Albertine region.

Gorilla Trekking is the major activity that is done in Mgahinga Gorilla National Park.  Most tourists who visit engage in mountain gorilla trekking safaris. The park has only one habituated gorilla family known as Nyakagezi. This family is very interesting and easy to track. It consists of 10 members with 1 Silverback called Mark who dominates the daily activities of the family. It was famous for its migratory behavior across the Democratic Republic of Congo (DRC) and Rwanda. Gorilla trekking starts early in the morning at Ntebeko briefing point, after you head to the forest in search of these creatures. It involves hiking and passing through unclear paths, on your way you can spot some other wildlife like monkeys, baboons; birds, tree species, butterflies. On encountering the gorillas you are strictly allowed to spend one hour with them as you take some photos without a flashlight and observe their ways of life. The activity is restricted to people above 15 years and the gorilla permit costs $700 USD for Foreign Non-resident, 600USD for Foreign residents and 250,000shs for East African residents. The fee includes; all entrances and car park fees. These permits are booked through your trusted local tour operator Engagi Safaris or the Uganda Wildlife Authority.  It is advisable to book your gorilla passes at least 4 months to the travel period given that there is a high demand for the Mgahinga gorilla permits, especially during the peak season. 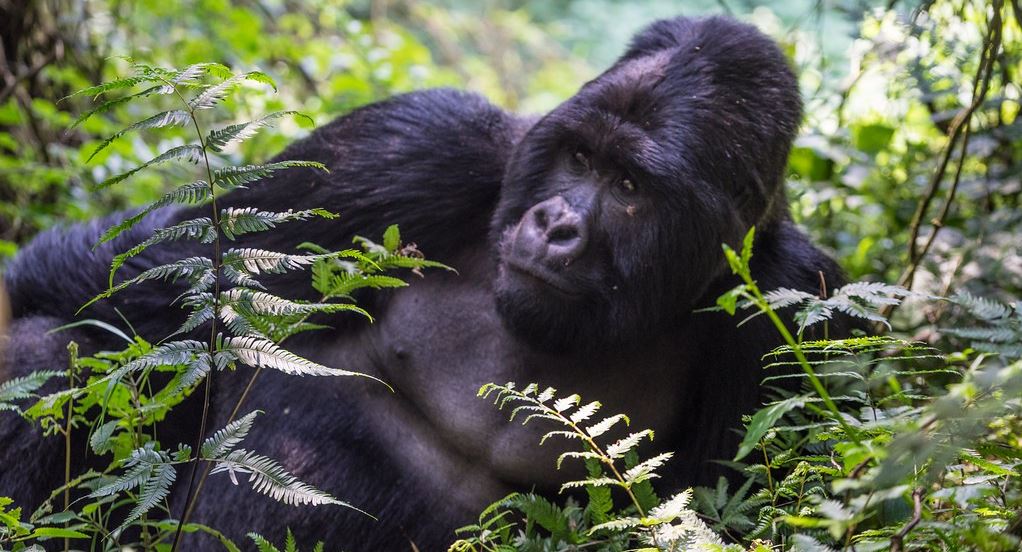 As earlier noted, gorilla trekking is the park’s major activity, visitors also hike the three volcanoes to enjoy the mesmerizing scenery, the hikes range from 4-8hours. This is an interesting adventure which gives you an opportunity of being in 3 countries at the same time. The hike can be combined with a gorilla trekking safari to Mgahinga

The park is mostly home to primates, golden monkey tracking is another no miss activity when you visit Mgahinga National Park. Currently, 3000-4000 golden monkeys were recorded in Mgahinga however, around 40 – 60 golden monkey troops are habituated and visitors hike to higher altitudes in the bamboo zones where they prefer to stay most of the time. The activity is carried out the same way as gorilla trekking as explained above. A golden monkey permit in Uganda costs $50 per person for foreign non- residents, $40 per person for foreign residents and 20,000UGX for East African Residents. These permits are booked through your trusted local tour operator Engagi Safaris or the Uganda Wildlife Authority. Golden Monkey tracking is also available for tourists who wish to spend more quality time and understand the detailed information regarding the golden monkeys pay $100 per person.

You will be accompanied by a local Batwa guide who has rich knowledge and information regarding the Batwa Tribe, their traditional forest life and culture. They are the indigenous habitats of the forest who survived on hunting and fruit gathering. However, after gazetting the park, most of them were pushed out of the forest. You will enjoy the Batwa trail experience which starts from the thick forest in Mgahinga National Park, Mount Gahinga to Mount Muhavura as you learn more about these unique short people.

There are different bird spots in the park which include: the Buffalo Wall, forests, wetlands, and other habitats. This is why Mgahinga is a birder haven recording about 79 species. Some of the birds to see include; White-necked raven, Black kite, Pin-tailed whydah, Double-collared Sunbird, speckled mousebird, Paradise flycatcher, Ibis, Whydah, fire finch and many others found in the area. This activity can be done all year round in the morning, afternoon and evening.

This is a historical cave that was initially occupied periodically by Batwa who used it as a council chamber and a retreat, the food store, the consecrate heart of the forest, store for looted treasures, /hiding place during battles, the meeting place, and their shelter. The 342m long Garama Cave lies beneath a plateau on the northern edge of the park, 3km from Ntebeko.  The most exciting moment of visiting this Cave is listening to the Batwa women sing sorrowful songs and dance to songs relating to their ancient ways of living and how they loved the forest before they were evicted from it.

There are several campgrounds, hotels, and lodges around Kisoro and Lake Mutanda Area. There are no developed lodging facilities inside the park. There are various lodging options near the Ntebeko’s entrances. Depending on the season, you will need to reserve hotels and campgrounds well in advance.