Nairobi National Park is suited in the southern part of Nairobi Kenya’s Capital city, the only park in the world found in a city. It is Kenya’s and east African’s first national park established in 1946. In the late 19th century, the Athi plains east and south of present-day Nairobi was gifted with a variety of wildlife. Nomadic Masai lived and herded their cattle among the wildlife as well as the Kikuyu people who farmed the forested highlands above Nairobi. The people were always alert with guns to protect themselves and their gardens from animals which resulted in human-wildlife conflict. When the number of farms and livestock increased people were removed from their lands and the park was created.

The park’s altitude ranges between 1,533 and 1,760 m (5,030 and 5,774 ft) with a dry climate. January-March is hot and dry, April-June is hot and wet, and July-October is very warm and wet. Covering an area of 117.21 km2 (45.26 sq mi) with an electric fence around the park’s east, west and northern boundaries. River Mbagathi forms the park’s southern boundary and open to the Kitengela Conservation Area and Athi-Kapiti Plains this allows easy movement of the wondering species.
The park has quite a unique vegetation predominated by open grass plain with scattered Acacia bushes, highland dry forest There is a riverine forest along the permanent river in the south of the park. Several plants that grow on the rocky hillsides are unique to the Nairobi area.

ATTRACTIONS WITHIN NAIROBI NATIONAL PARK.
WILDLIFE
Kenya boats about the location in the city and the variety of wildlife with city background. The park has a large and diverse wildlife population these include: wildebeest and zebra are found in the Kitengela conservation area and migration corridor to the south of the park to reach the Athi-Kapiti plains. The animals disperse over the plains in the wet season and return to the park in the dry season this is the best time to visit the park. The concentration of wildlife in the park is greatest in the dry season when areas outside the park have dried up. Small dams built along the Mbagathi River give the park more water resources than these outside areas. They attract water dependent herbivores during the dry season. The park is the northern limit for wildlife migrations in the dry season. The wildebeest and zebra migrations in July and August.

BIRDS
The park has a number of bird species about 500 permanent and migratory species in the park. The dams in the park have created a man-made habitat for birds and aquatic species. Some of the birds which can be seen in the park include: Yellow-throated Sand grouse, Martial Eagle, African Crowned Eagle, Lappet-faced Vulture, Violet Wood-hoopoe, Nairobi Pipit, Croaking Cisticola, Desert Cisticola, Speke’s Weaver, Secretary bird, Northern Pied Babbler, Pangani Longclaw, African Quail-finch, Zebra Waxbill, Kori Bustard, Saddle-billed Stork, African Citril among others. 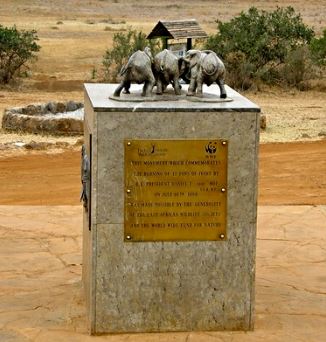 THE IVORY BURNING SITE MONUMENT
It is located within walking distance of the Nagolomon reservoir, on the northwestern end of Nairobi national park. On 18 July 1989, the former President of Kenya Daniel Arap Moi set fire to a 6m high pile of 2,000 elephant tusks weighing 12 tons and worth $3 million worth of ivory – the entire stockpile from 4 years confiscations from poachers in a highly publicized event to demonstrate commitment to save the African Elephant from mass slaughter and extinction due to the lucrative ivory trade.
ANIMAL ORPHANAGE
It is one of Kenya’s most successful rhinoceros sanctuaries, and it is one of only a few parks where visitors can be certain of seeing a black rhinoceros in its natural habitat. The David Sheldrick Trust runs a sanctuary in the park that hand-rears orphaned elephant and rhinoceros calves and later releases them back into secure sanctuaries.

ACTIVITIES DONE IN NAIROBI NATIONAL PARK
GAME DRIVE
Since the park is gifted with a variety of animals, game drive is one of the major activities done while in Nairobi National Park. It gives you a chance to see your favorite animals in the wilderness. This a 2-3 hours safari package (early morning or late afternoon) where you are taken around in the four-wheel drive. Some of the animals that can be seen in the park include Cape buffalo, baboon, eastern black rhino, gazelle, Grant’s zebra, cheetah, Coke’s hartebeest, hippopotamus, African leopard, lion, eland, impala, Masai giraffe, ostrich, vultures, and waterbuck.

VISIT THE ANIMAL ORPHANAGE.
The sanctuary is located close to the park’s main entrance. It was opened in 1963. It was set up by Daphne Sheldrick after the death of her husband David Sheldrick, the anti-poaching warden of Tsavo National Park. The Orphaned and sick animals are brought to the sanctuary from all over Kenya. While here you will get a chance to see these orphaned animals being taken care of and how they feed.

BIRDING.
Nairobi National park is a birders paradise with about 500 bird species, one of the eight species of Kenya Mountains Endemic Bird Area, 27 species of the 94 Somali–Masai biome, and 25 species of the 67 African Highlands biome that occur in Kenya, have been recorded in the area. Most birders are always assured of spotting their favorite birds in the wilderness. This is a full day activity done along with the water bodies, in the forest and savannah plains of the park.

CAMPING
The park has a serene environment and a truly beautiful place. It is a perfect choice to have a place to get away where the air is clean. While camping you can see some animals and you can still see the city lights. Some campsites provide tents and the campers have to bring their own mattresses and/or sleeping bags. Booking for the tents is done at East gate or at the park’s main gate along Langata Road.
Other activities include Team building, Picnicking, Events in the wild, Nature walk and Stargazing.