Tsavo West National Park “Land of Lava, springs, Man-Eaters & Magical Sunsets” is a beautiful, rugged wilderness located in the Coast Province of Kenya. It is part of the Tsavo Conservation Area which was divided by the A109 road Nairobi-Mombasa and a railway to form East and West Tsavo. The park covers an area of 9,065 square kilometers making under the management of Kenya Wildlife Service.

The park is visited all year round however, the best time to visit it is usually from May to October when the humidity and temperatures are relatively low. This time is also the tourist peak season in Tsavo and is ideal for game viewing.

Tsavo West is a more popular destination on account of its attractions which pull tourists. Some of the attractions include:

Bird species: About 600 birds are recorded in this park some of the birds include: 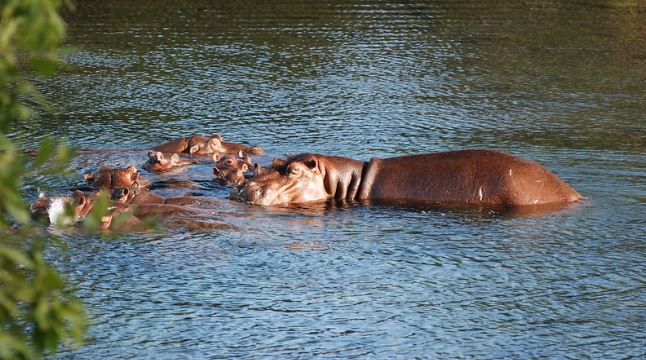 Hippos in the Mzima Springs

These splendid springs with crystal clear water coming from the underground streams flowing from the nearby Chyulu Hills. They create the most welcoming and lovely scene in Africa. The word comes from a Swahili word meaning life.

Tsavo West is made up of quite a number of volcanic features which make the park look like a volcanic arena. Some of the features include:

Shetani lava;  it is found near Chyulu Hills game, 8 km long, 1.6 km wide and 5 meters deep. It was named shetani by the locals a Swahili word which means “devil”. It was their first time to see ‘fire’ eruption and ‘flowing’ on the ground about 500 years ago, they believed that it was the devil himself emerging from the earth. Sighting this lava is quite special and spectacular.

Chaimu volcanic crater: It is a tall rising hill clad with the bright black color of the lava stones when you visit the crater, you will notice how the road color changes from red to black as you get closer to Chaimu crater. It is also known as “the devil’s crater”. It is one of those viewing points within Tsavo West National park.

Five sister’s hills: The scenery is stunning with a low ridge of black lava outcrop, long luscious grass and conical hills that make the Five Sisters. The five almost identical cone-shaped hills are located in one area and resemble one another.

The area is named after the buzz of cicadas that inhabit them and the howl of wind that hits the bare rocks by producing a roaring sound. The rock is now used now as a wonderful viewing plateau, you can enjoy 360-degree views of the Tsavo West. It gives magnificent views over Rhino valley as the Rhinos enjoy a sundowner.

The poacher’s lookout is a rush roofed hut found on a hill in Tsavo west which was used by the park rangers to fight against the poachers. It is now used as a viewing point for the Masai herds.

It is a small, shallow lake found on the border of Kenya and Tanzania. It is water by Kilimanjaro and Tanzania River and has a vast aquatic life. Waterbirds also harbor on the lake like a pygmy goose, black egrets, black coucal

Since the park is endowed with vast wildlife as mention above, a game drive is among the no miss activity which takes you close to the wildlife-rich spots as they go about their daily routes. They take place in the morning, evening, whole day and night. The morning game drive gives you an opportunity to catch up with the early risers hunting their prey like the lions, birds leaving their nest to go look for food and water not forgetting watching the sunset set view in the wilderness. The evening game drives rewards with antelopes as they graze in the savannah plain, hippos and crocodiles sun basking along the shores, predators under shades of dry trees. Full day game drives give you more time with the animals as you observe their ways of life-like behaviors, feeding habits, and relationships. Finally, the night game drive gives you the opportunity to explore the nocturnal wildlife in Tsavo, which include leopards, civet cats, genet cats, and bush babies. Another exciting aspect of the night game drive is experiencing the night sounds and starlit sky.

Tsavo West is a known birder’s paradise, over 600 different birds species are recorded these including the 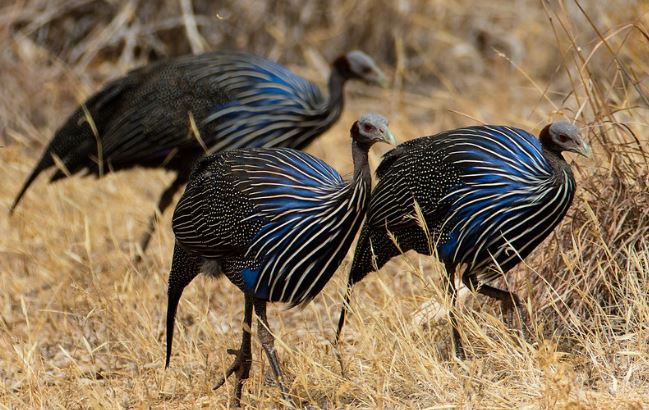 Tsavo was also in the news during World War I when British forces built forts along the Tsavo River.  Several battles were waged here between the British and the German army‚ who were based in what was then Tanganyika‚ now Tanzania.  The film Shout at the Devil features an eccentric campaign using fleets of Rolls Royces.  The troops in Tsavo surrendered three months after the rest of the world had signed an armistice.  Tours of the battlefields and war cemeteries make a fascinating addition to any safari.

It is located near Mwatate in Taita-Taveta County in the former Coast Province, approximately 220km from Mombasa, Kenya adjacent to the park and Taita Hills. It is owned by the community covering an area of 48,000 acres. The sanctuary is formed by the Lualenyi, Mramba Communal Grazing Area, and Oza Group Ranch, hence the acronym “LUMO”. It is home to cape buffalo, zebra, hartebeest, impala, waterbuck, Thomson’s gazelle, lesser kudu, dik-dik, elephant, leopard, Masai lion, Masai giraffe, and other smaller animals, numerous bird species.

A visit to these scenic springs is worthy a while, they attract rich wildlife including elephants, hippos, crocodiles, gazelles, zebras and giraffes wandering around the banks through the thick acacias and raffia palms together with a large number of monkeys and birds. There are well-marked nature trails, an observation platform, and an underwater glass tank. A guided walk by a professional ranger is highly advised for safety. Mzima is also the main source of Mombasa’s city water supply.

The nearby Chyulu Hills‚ called the Green Hills of Africa by the famous author Ernest Hemingway‚ are strikingly attractive extinct volcanoes with a wealth of wildlife; hiking‚ horse riding‚ bird watching‚ game viewing and camping are all available here. 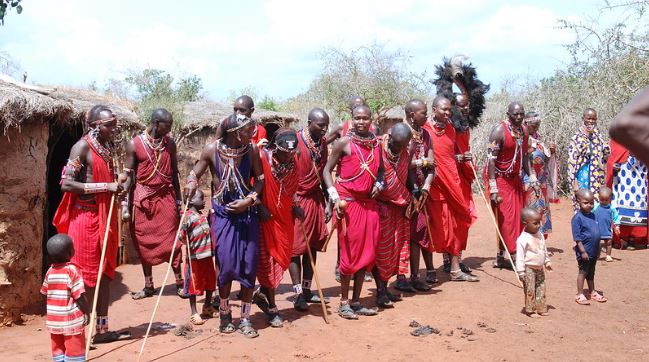 Explore unique Masai lands and enjoy their rich culture by visiting the Masai communities/ villages. This visit is ideal for anyone who wishes to understand the history, lifestyle of the local Maasai and traditions such as food, dance, and others. They are pastoralist who

By air: Daily chartered flights to Tsavo West‚ landing at Kilaguni and Finch Hattons airstrips in Tsavo West‚ and at Ol Donyo Lodge airstrip in the Chyulu.