Volcanoes National park is Rwanda’s untamed and timeless area, popular and most beautiful park. It is situated in the northwestern part of Rwanda in a small town of Musanze, approximately 3 hours’ drive from Kigali. Covering an area of 160sq/km which consists of rainforest and surrounded by five volcanoes namely; Karisimbi, Bisoke, Muhabura, Gahinga and Sabyinyo which make up the Virunga ranges that also hosts Virunga National Park in Democratic Republic of Congo and Mgahinga Gorilla National park in Uganda. It is Africa’s and Rwanda’s first national park which was designated in 1925 currently under the management of Rwanda Tourism Board. It was recognized as a United Nations, Educational, Scientific Cultural organization site in 1987 for being a habitat to the 2 endangered primates; Mountain Gorillas and Golden Monkeys. 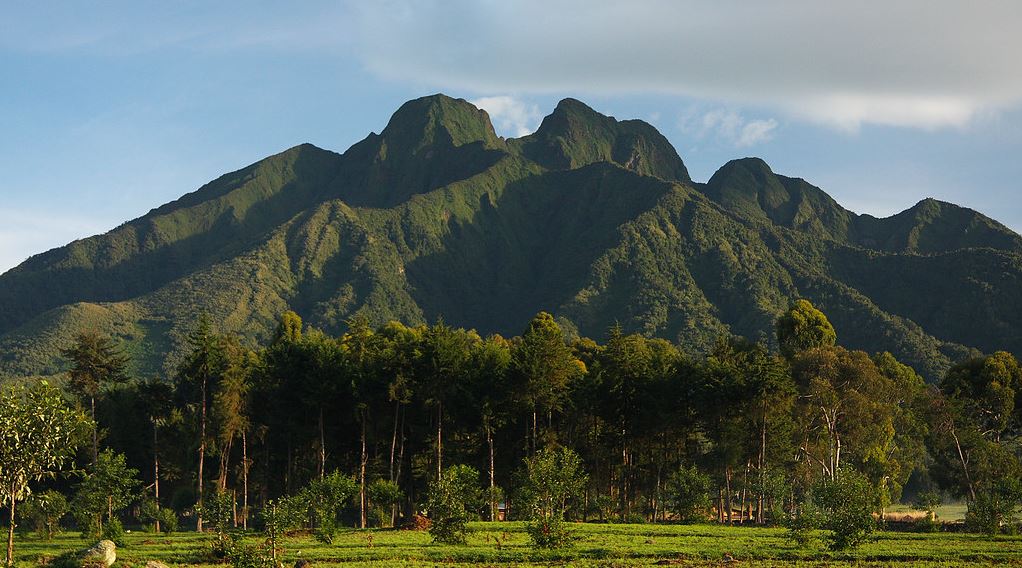 Volcanoes National Park also known as Parc National des Volcans was a base for Dian Fossey an American naturalist where she carried out her research about the gorillas. In 1967 she arrived in Rwanda and stationed her research center at Karisoke between Karisimbi and Bisoke. She spent her time in the park and still honored for protecting and saving many mountain gorillas from extinction. She treated the gorillas, influenced many people to develop a love for the gorillas and fought against poaching. Unfortunately, unknown assailants murdered her at home. Poachers are believed to have committed this clod blood crime since she had been fighting against their acts. She is buried in the park in a grave close to the research center, and amongst the gorillas which became had her life. After some years, Fossey’s life was later portrayed on the big screen in the film Gorillas in the Mist.

The park is endowed with the vast diversity of flora and fauna which makes the park an outstanding destination. Its vegetation varies with altitude, bamboo (base altitude), Hagenia and Hypericum forest (2600-3300m), Sub-alpine (3300-4000m), and Afro-alpine (4000m+). Due to the altitude, it is generally quite cold, especially during the evenings.

The park is an all year round destination however the best time to track the gorillas is during the dry season for easy movement because of the dry surface.

The park is famous for the mountain gorilla (Gorilla beringei beringei). However, there are also other mammals which include: golden monkey, baboons, black and white Colobus monkeys, black-fronted duiker, buffalo, spotted hyena and bushbuck. Some forest elephants can also be rarely seen in the park. 179 recorded bird species at least 13 species and 16 subspecies endemic to the Virunga and Ruwenzori Mountains.

There are quite a number of exciting, adventurous and cultural activities which can be done in the park. Some of these are explained below;

The gorillas are the primary attractions of the park, many tourists from different parts of the world visit the park to engage in gorilla trekking activity in the search for these magnificent endangered creatures in their natural habitat. Apart from this park, they can also be seen in Virunga National Park in DRC and Bwindi Impenetrable Forest National Park and Mgahinga National Park in Uganda. 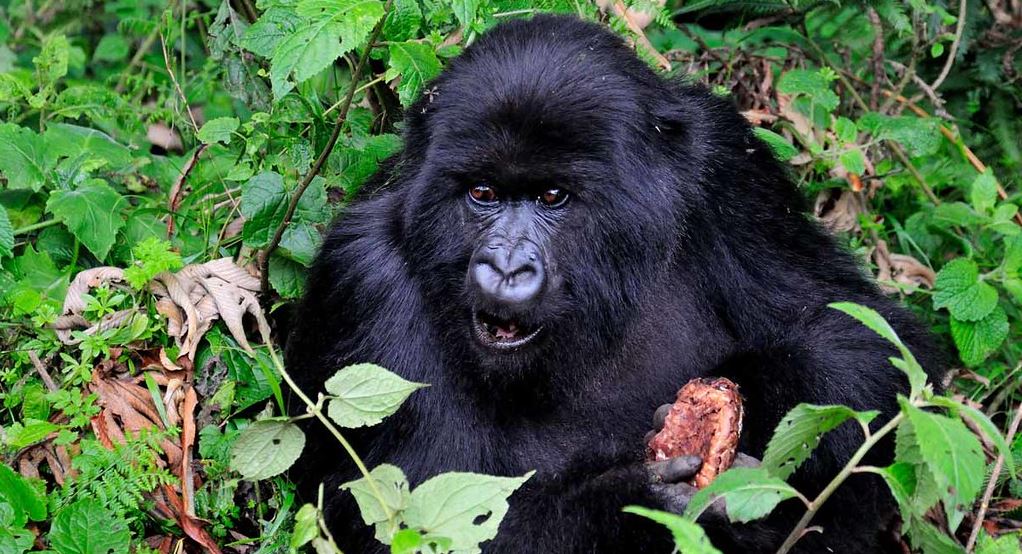 The park has 11 gorilla habituated families ready for to receive tourists namely; Susa family (33 members, 2 silverbacks), Sabyinyo family(13 members,2 silverbacks), Amahoro family(18 members, 2 silverbacks), Agashya family (13 members), Umubano family(13 members), Kwitonda family(23 members,4 silverbacks) Hirwe family(16 members,1 silverback), Karisimbi(16members,1 silverback), Ugenda family ( 11members,1 silverback). A gorilla trekking permit is charged $1500 per person it includes; park fees for Volcanoes National Park, spending one hour with the gorillas, security, and services of an armed ranger guide. You are advised to book a permit at least one month before the trekking date since they are highly competitive, they can be booked through your trusted local tour operator Engagi Safaris or Rwanda Tourism Board. The activity is strictly for people above the age of 15 years and 8 people are allowed to visit a particular gorilla family per day. Tourists report at the park head headquarters by 7:00 for a pre-tracking briefing and then enter into the forest to start the activity. It is a guided activity which takes about 2-4 hours and you are only allowed 1 hour with the gorillas. While with the gorillas you are not supposed to take photos with a flashlight they are so sensitive. The gorillas are so interesting to see, it is always a wonderful unforgettable experience to be with them.

The park is also home to the most endangered golden monkeys, they are unique with gold coat fur which makes them strikingly beautiful to see. Their facial appearance is different from other monkeys. They are endemic to the high altitude forests of volcanoes national park, Mgahinga National Park and Virunga National Park. Tracking these creatures is an interesting fun activity that involves hiking through the forest.

A golden monkey tracking permit costs $100 per person it includes; park fees for Volcanoes National Park, spending one hour with habituated golden monkeys as well as security and services of an armed ranger guide. The permit can be paid for on-ground, booked through Rwanda Tourism Board or Engagi Safaris Ltd. It should be noted that golden monkey trekking is a half-day activity and does not have a minimum or maximum number like gorilla trekking which allows 8 people. 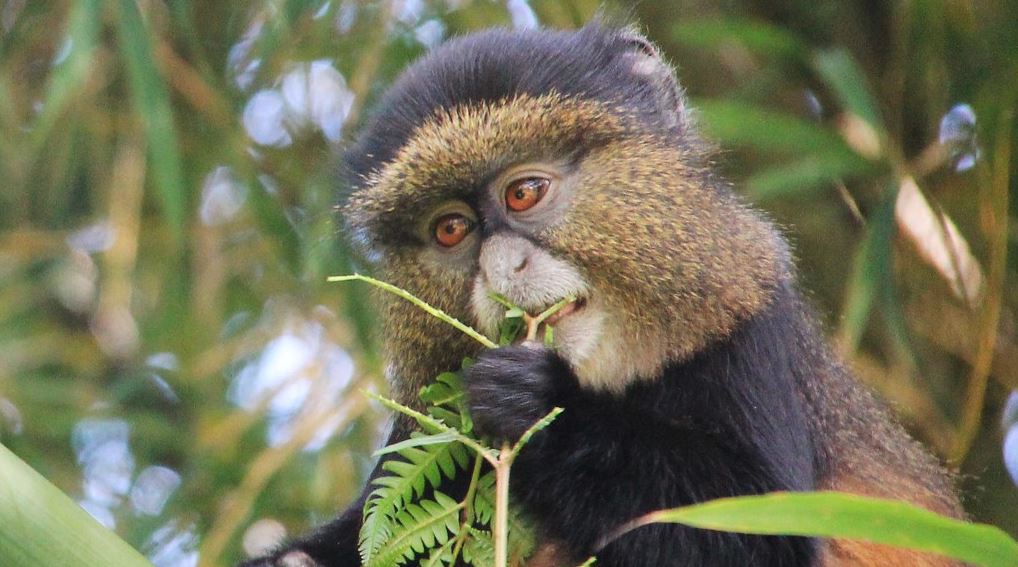 The park forest is alive with the calls of colorful birds, recording a total of 180 species including the Grauer’s rush warbler, 16 Albertine Rift endemic including francolin, Rwenzori batis, Archer’s ground robin, collared Apalis, Rwenzori double collared sunbird, dusky crimson-wing, red-faced woodland warbler, and the Rwenzori turaco. It is a birders haven for those who are interested in birds. This activity starts with a briefing after you enter into the forest in search of your favorite birds. It can be done in the morning and evening.

The park has is surrounded by five extinct volcanoes namely; Muhabura (at 4,127 meters), Gahinga (at 3.474 meters), Sabyinyo (at 3,634 meters), Bisoke (at 3,711 meters), while the highest is the Karisimbi (at 4.507 meters). Enjoy the hike of these ancient volcanoes, swathed in rich, green rainforest. You will be rewarded with tantalizing glimpses of the magnificent peaks of the Virunga range through the forest canopy.

VISITING THE TOMB OF DIAN FOSSEY.

Dian Fossey is a popular American primatologist and conservationist known for undertaking an extensive study of mountain gorilla groups from 1966 until her 1985 murder. History talks about her as a great person who loved gorillas and fought against poaching in Volcanoes National Park. Her tomb is a memorial site and regularly visited by tourists. It is so inspiring to learn about someone who was so dedicated and left a legacy that exists even today. The hike is quite challenging but incredible.

These caves are found in the center of Volcanoes National Park. They are believed to be as a result of volcanic eruption decades ago. They are 2kms covered in the lush greenery, inside there are homes for the bats. The beautiful vegetation around these caves offers a beautiful background for excellent pictures. Explore these outstanding caves for a better understanding of the geological and geographical historical development of the globe.

The Iby’iwacu village is located around Parks in Northern Province. This cultural tour enables you to learn about the lifestyles, activities, crafts, and ways of living of local people. Iby’Iwacu Cultural Village is committed to displaying the ways of living, traditional lifestyles, and dances to tourists. It gives you a rare chance to meet local people, in their environment, with a taste of our culture and traditions. Be genuinely welcomed by the community as a special visitor while they proudly present to you aspects of their traditions and beliefs. The only way to get to know people is by getting close and interacting with local people, and taking part in their daily activities.

It is approximately 2 and a half hours from Kigali to Ruhengeri town, then from Ruhengeri to Kinigi the park headquarters, it is 14km.

Those traveling from Uganda to Rwanda by road is a 6-7 hour drive and a flight takes 45 minutes from Entebbe International Airport to Kigali International airport, then transfer by road to kinigi park headquarters by road approximately 103km.

The park has a wide range of accommodation facilities, including Safari lodges and hotels, campsites, tented camps, resorts and others in and outside the park. Ranging from Luxury, midrange to budget. The ambiance of the different luxury accommodation facilities in Volcanoes National Park will give you the warmest feeling of home away from home. There are 2 luxury facilities; Five Boutique hotel, Mountain gorilla nest lodge. Midrange; Da Vinci gorilla lodge, Le Palme Hotel, Mt Gorilla Nest and Gorilla solution lodge. Budget; Hotel Muhabura, Kinigi guest house, and Gorilla Villa